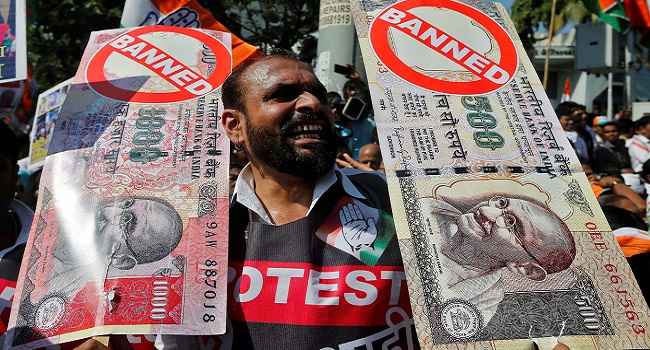 Demonetization has gone horribly wrong. There are no ifs and buts about it. One man’s hubris is inflicting mass harassment. Worse, there is no end in sight yet to the manmade crisis. Mercifully, the poor are still being generous, giving the benefit of the doubt to the decision-makers. When the gains and losses are finally toted up, and they come to realize that all that pain was not worth the candle, there could be a backlash both in economic and political terms. Even snake oil salesmen are prone to fail if they chance their luck too often on shoddy goods.

The reason why demonetization has landed the country in a huge mess is that no homework was done before they decided to junk nearly 90 percent of the currency in circulation. Unilateralism is the bane of the Modi government. Even after making ample allowance for secrecy, there can be no excuse for abandoning meticulous planning. Self-assuredness degenerates into insouciance when the leader fails to factor in all that needs to be factored in before dropping such a bombshell on a hapless people.

It is hard to believe that the decision was taken without consulting domain experts. A handful of officials who have traveled with the Prime Minister from Gujarat, and virtually constitute his inner council, could not possibly have anticipated the multifaceted troubles due to the famine of currency. Consider how various accredited foreign missions are raising Cain about the cash crunch. A month after demonetization if there is no cash for diplomatic missions in the capital city of India, it is damaging for the image of a country which seeks a place on the global high table.

In a way, the demonetization move once again underlines the inherent flaw in the government. If the Manmohan Singh PMO was completely powerless, a mere post-office and rubber stamp for decisions taken elsewhere, the Modi PMO has become all too powerful. Frankly, everyone else in the government is virtually rendered a cipher while the handful of people in the PMO rule the roast.

Doubtless, there is an upside to a powerful PMO. Indecision and dithering of the UPA years has yielded to prompt decision-making. Also, implementation now carries the weight of the highest in the political executive. Yet, the heavy concentration of power in the PMO has costly negatives as well.

Recall how, within months of becoming prime minister, Modi had sought to change the controversial land acquisition law. The move was well intentioned. But the unilateral nature of the decision eventually forced him on the back foot. False propaganda that the amendment was anti-farmer caused the retreat.

Now, in the case of demonetization it is the critics’ turn to be dubbed anti-poor—and pro-black money. This is the only reason why despite widespread distress, the Opposition has failed to strike a chord with the people.

Yet, when the window for conversion of old currency for new is finally shut on December 30, and there is no unearthing of sizable black money, the tables could be turned. Already, official spokespersons are beginning to concede that all illegal Rs 500 and Rs 1,000 notes in circulation might be accounted for. Which means that—aside from faster digitization of the economy—other gains could be illusory.

Had the Modi PMO not acted like an all-knowing Aflatoon, the rebuffs like the land acquisition ordinances and the no-gain demonetization could well have been avoided. This is the price the country pays for the PMO keeping the decision-making process a closed-door affair. Wider consultations, especially with the domain experts, are essential in such matters. Also, when the Prime Minister behaves in a domineering manner, when he exudes arrogance, when inputs from all others are shunned, the outcome can be fraught with risks.

Besides, the powerful PMOs of the past had experienced and clued-up aides. There is no PN Haksar, AN Verma or a Brajesh Mishra among the largely faceless officers who man the Modi PMO.  Even Kutty Nair, Manmohan Singh’s Principal Secretary, had a better profile—though his family, too, dipped into the open till—than anyone in the Modi set-up. Also, remember that Modi, himself, is new to New Delhi, having worked all along in Gujarat.

No one in the government or outside knows how soon the cash crunch will end. The four security  presses in Nashik, Dewas, Salboni and Mysuru despite working round the clock cannot meet the demand for replacing 23.1  billion pieces of illegal notes, at least not till the end of the year. Admittedly, they have the capacity to print the required quantity in a full year, but it will be well-nigh impossible for them to do so by the end of December. In fact, the RBI in its latest annual report says that the presses fell short of the intended supply in the last three consecutive years. Therefore, it is surprising why the government has not commissioned foreign presses for supplying the currency notes. Why make it a matter of prestige?

Conmen to the fore

The arrest of Mahesh Shah, a minor Ahmedabad-based businessman, who had declared under the previous black money amnesty scheme a whopping Rs 13,680 crores, yet again underlines the propensity of Indians to make a fast buck by hook or crook. Having declared that incredibly high sum, Shah was going around asking businessmen and traders to avail his services at a hefty commission in case they had missed out on declaring their black money.

Meanwhile, the Mumbai-based family which had declared Rs 2 lakh crores on four different PAN cards has done the vanishing act. When the IT sleuths went looking, they found the house in one of the poorer quarters shuttered. Neighbors said they had gone missing a few weeks ago. Apparently, they had claimed, falsely, of course, that they were seeking to launder the donations amassed by a popular Sufi shrine.

Also, it turns out that a number of stores selling foreign luxury brands in a shopping mall virtually dedicated to them issued vouchers against illicit currency deposited in lakhs towards future purchases. Indeed, a couple of classy restaurants patronized by the rich and the famous did likewise.

There were also anecdotal evidence that hawala network exchanged voided notes with foreign currency at a hefty commission. For example, if you paid Rs. 10 lakh in illicit notes, you could get foreign currency in Dubai worth Rs 8 lakh. We are good at jugaad, aren’t we?

A senior Congress member of the Rajya Sabha from Uttar Pradesh recently invited a number of politicians, including NDA ministers, to, what he claimed, was the marriage of his son. And quite a few attended the grand party in his private house in south Delhi. But some of the VVIP guests were surprised on learning that the host did not have a son, having been blessed with two daughters.

Apparently, the marriage was of the son of a prominent Noida builder. Since there was a close nexus between the builder and the neta, the latter falsely claimed that his son was getting married in order to invite the VVIPs. Money makes people do all sorts of things, isn’t it?

Nasbandi felled Indira Gandhi. The jury is still out on Nitish Kumar’s nashabandi. As for notebandi, well… the coming poll in UP will soon reveal what the people think about it. Samajh gaye na?

(Virendra Kapoor is a senior Delhi-based journalist. He was at the forefront in exposing Congress corruption during the Rajiv Gandhi era and is known to be close to several senior BJP leaders.  In this column published by the Kannada daily, Kannada Prabha, last week, he takes a hard, unsparing look at demonetization. It is a stinging criticism of Prime Minister Narendra Modi’s ‘surgical strike’ and autocratic style of functioning. Reproduced here is the English original of Kapoor’s column.)