Views on news
Home Media Television “PM tweets on everything, why not on BHU lathicharge?” 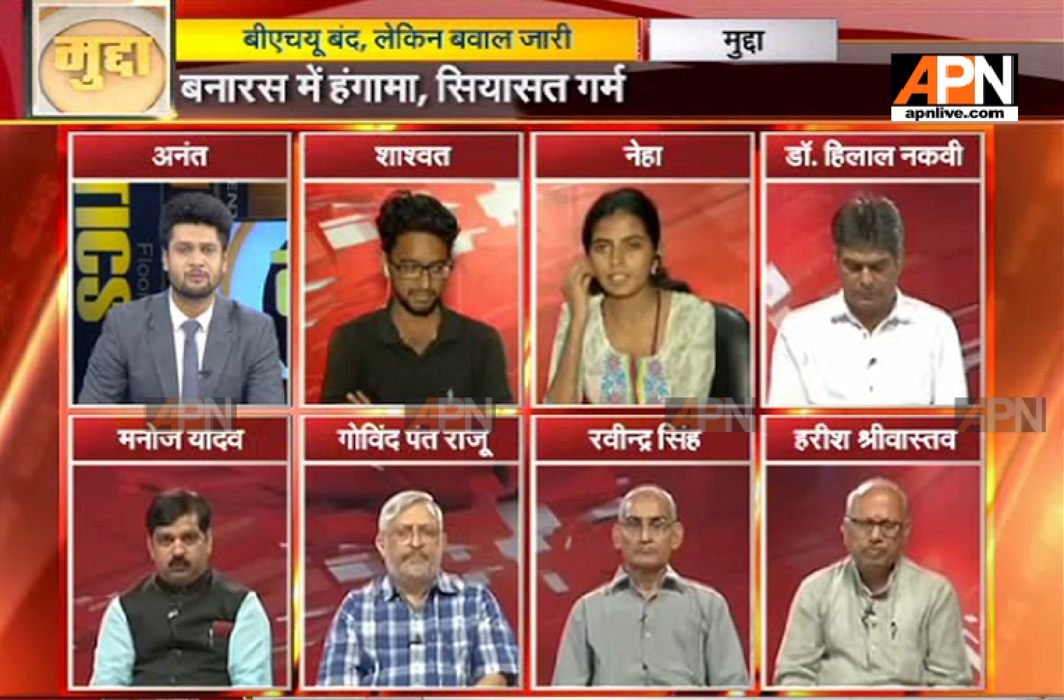 On Mudda, panellists are joined by BHU students who make pertinent comments

The issue of lathicharge against protesting girl students of Benaras Hindu University (BHU) grabbed headlines and forced Chief Minister Yogi Adiyanath to order an inquiry. The fact that Prime Minister Narendra Modi was in Varanasi the day the incident happened was not taken too lightly by the critics as Varanasi happens to be the PM’s Lok Sabha constituency. The issue was taken up by APN’s popular debate show, Mudda. Anant Tyagi anchored the debate with the participants being Dr Hilal Naqvi of the Congress, Harish Shrivastava of the BJP, Manoj Yadav of the Samajwadi Party, Ravindra Singh, political expert, and Govind Pant Raju, APN consulting editor. Anant asked the participants why the lathicharge was considered necessary since all that the students wanted was to talk to the Vice-Chancellor regarding the security and incidents of eve-teasing on the campus.

Putting the blame squarely on the university authorities, Harish Shrivastava said that it is an “internal matter” of the varsity, and the unrest should have been managed by the authorities in a peaceful way. Asked why the chief minister or the prime minister did not intervene immediately, he said that the officials must not have briefed them about it. He said that on learning of the incident, the chief minister ordered the Commissioner to probe the incident, and the culprits will not be spared. He added that the girls too were “pelting stones” at the cops, and students from the All India Students Association (AISA), Jawaharlal Nehru (JNU), Delhi University (DU) had also joined the protest, adding fuel to the fire.

To this, Naqvi said that it was a peaceful agitation, and the students had no option but to protest since they had been denied a meeting with the V-C. He added that the BJP is misusing its popular slogan of “Beti padhao, beti bachao (educate daughter, save daughter)”.

Ravindra Singh said that the crisis could have been easily sorted out if the V-C had agreed to meet the students. “Modiji is very fond of his Mann ki Baat (reference to the PM’s popular radio programme), he should also listen to the demands of others,” he said.

Raju said that there is no point dragging AISA into this. “In any case AISA is a students’ body, even if they came, what’s the problem?” he asked.

Meanwhile, Neha, a BHU student who was witness to the lathicharge, joined the debate and said that the issue was of security. “We were asking for our rights. We did not ask for the lathicharge,” she said.

Manoj Yadav also said that the lathicharge against protesting girl students was totally uncalled for.

Shashwat, another student from BHU, said that the PM is so fond of tweeting, “but how come he did not find it right to tweet anything on this issue?”

Neha said that it was a BHU struggle and by saying that there were AISA students, or JNU students, politicians are trying to weaken the agitation of the protesting BHU students.

Naqvi added that security should be immediately beefed up, as per the demand of the students, and CCTV cameras should be installed to make students feel safe.

Ravindra Singh said that the biggest culprit is the V-C and he should be removed. He pointed out that despite the stir being against the V-C, it is the V-C who has been asked to get the probe started.

In the second part of the show, Anant took up the issue of the deepening schisms in the Samajwadi Party. Supremo Mulayam Singh Yadav, in his latest press conference, made conflicting statements. On the one hand, he said he was disappointed with Akhilesh Yadav, and on the other he said that he is neither with Akhilesh nor with Shivpal Yadav, but with the SP. This statement was taken by Akhilesh supporters as being a clear indication of the supremo’s distancing himself from Shivpal.

Raju said that this looks like Mulayam is totally helpless, watching the proceedings of the party as it stands now.

However, Manoj Yadav said that Mulayam is still the party stalwart, and he can take charge whenever he wants to as he is a completely capable leader even today.

Shrivastava said that, whatever the happenings in the SP, no party is a threat to the BJP.