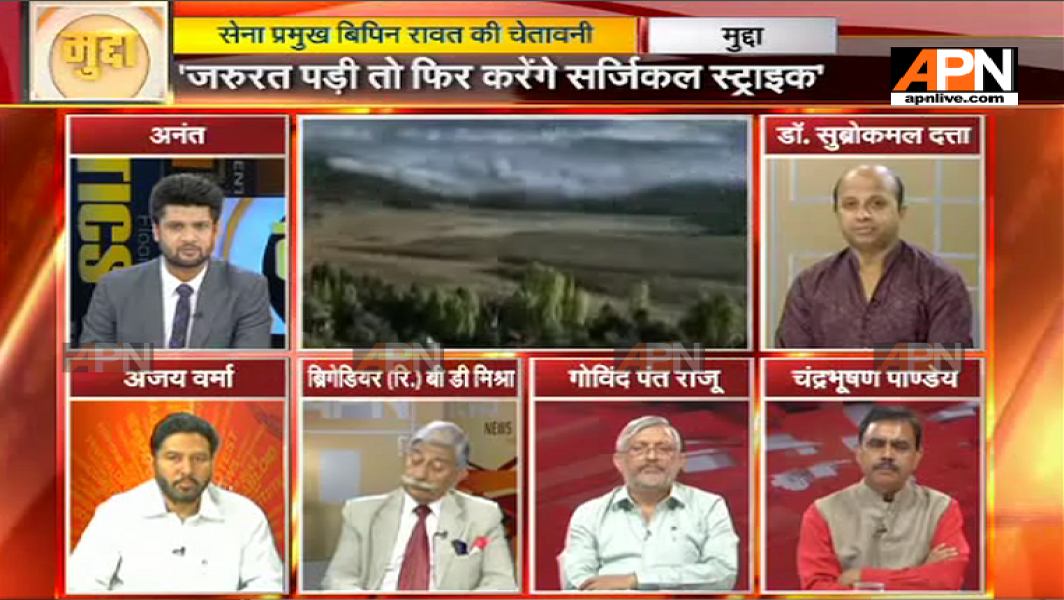 Army chief General Bipin Rawat has said that surgical strikes on terror launch pads across the Line of Control could be repeated. Gen Rawat said that cross-border infiltration will continue because camps across the LoC, from where terrorists are launched, are still operational, and warned that the Indian Army is ready to “keep burying terrorists two-and-a-half feet below ground”. The issue of the “low-intensity war” that Pakistan is waging across the border was discussed on Tuesday on APN’s popular debate show, Mudda. Anant anchored the debate with the participants including defence expert Brig BD Mishra, foreign affairs expert Dr Subrakamal Dutta, the Congress’s Ajay Verma, the SP’s Sanjay Agarwal, the BJP’s Chandrabhushan Pandey, and APN Consulting Editor Govind Pant Raju.

Putting things in perspective, Brig Mishra said that the army is all-powerful in Pakistan. “The army gains if a war-like scenario is kept thriving along the border. The ISI is the de facto government in Pakistan,” he said.

Dr Dutta said that Pakistan is not ready to face the situation, but India is fully prepared, “and not just two and a half feet below ground, India has the capability to crush the miscreants 30 feet under the ground”.

Raju said that China is watching the situation, and in the past has been miffed when international pressure is mounted on Pakistan to make it buckle.

When Verma said that the army should not just talk, but also show action, Brig Mishra said that it is not that the army just knows how to talk loudly. “The army is showing its determination again and again,” he said, adding that Pakistan is in a bad shape vis-a-vis its economy, corruption, policing and so on, and India is prepared to show its might.

Pandey said that ever since Prime Minister Narendra Modi took the oath of office, there has been political clarity in dealing with militants and Pakistan. Brig Mishra said that since it is like a low-intensity war on the border, casualties are bound to happen on both sides, and we should be prepared for that.

The second part of Mudda was taken up by the developments in the Benaras Hindu University (BHU) case wherein the Commisionmer, Nitin Gokarn, submitted a report in connection with the crackdown on student protesters and blamed the university administration for the violence.

Verma said that there has never been this kind of violence against protesting girl students before, under the previous political regimes.

Sanjay Agarwal said that the Vice-Chancellor, Girish Chandra Tripathi, is close to the BJP and Prime Minister Modi. The BJP-RSS control BHU, so the entire blame is on the BJP, he said.

Raju said that the leaders should rise above blaming each other. It is an administration failure, and girl students have been complaining earlier too, irrespective of the changing governments. We need to consider how to provide security to the girl students instead of finding fault with political parties, he said.