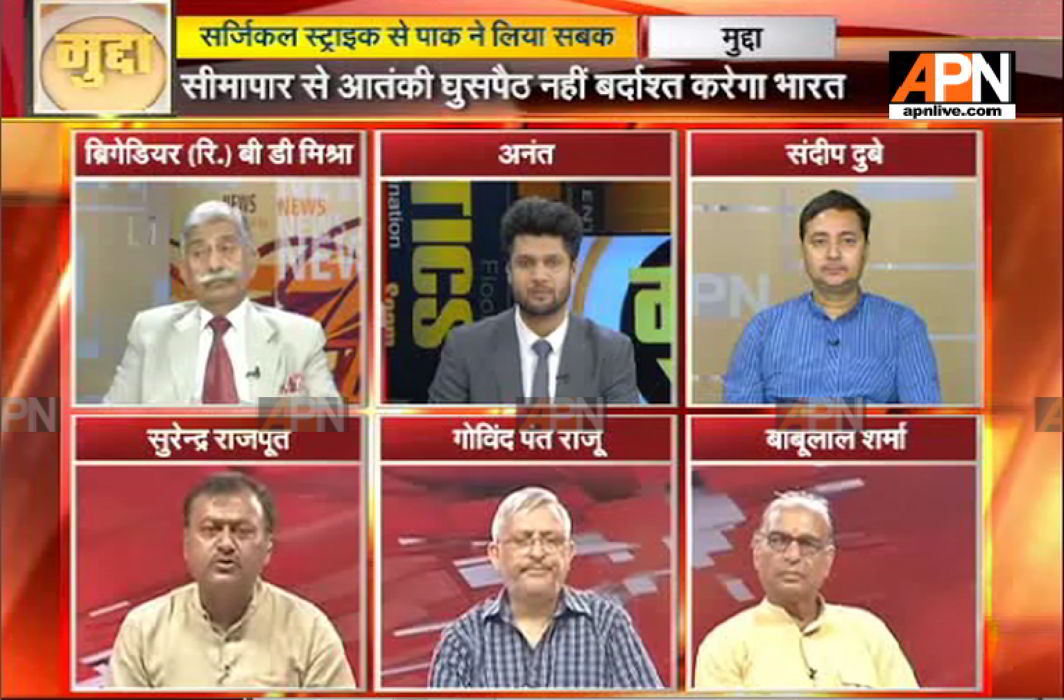 On September 29, 2016, 11 days after the Uri attack, the Indian Army declared that it had conducted surgical strikes along the border, resulting in significant casualties among Pakistani soldiers and terrorists. A year later, have there been any lasting changes as a result of those strikes? Moderated by Anant Tyagi, APN’s daily debate show Mudda sought to answer this query. Participants included Brigadier BD Mishra (retired), Congress spokesperson Surendra Rajput, BJP spokesperson Sandeep Dube, RSS spokesperson Babulal Sharma and APN consulting editor Govind Pant Raju.

Brigadier Mishra felt that the biggest impact of the strikes has been on the morale of the Indian Army. The Indian citizens, too, have increased faith in the soldiers knowing as they do that they are capable of defending them. At the same time, Pakistan has been taught a lesson. They now know that India will not take their shenanigans lying down. Even the terrorists, too, are now on the backfoot as latest reports from Kashmir suggest. However, he warned that as the Pakistani Army controls 40 percent of the economy of that country, it is in their interest to keep the tensions alive and so they will try to undo any good work done by both countries in terms of improving bilateral ties.

Asked if India has been in a proactive or reactive mode, Brigadier Mishra said, “In these times, a proactive mode means we anticipate attacks and kill the terrorists as and when they infiltrate the border. A reactive mode would be wondering what to do after the strike is over. In India, we now have a proactive opposition as far as terrorism is concerned and that’s the best thing one can hope for.”

Rajput, the Congress spokesperson, congratulated the Army for its role in curbing terrorism and defending our borders, but expressed doubts as to the policies of “our political leadership”. “They should make it clear how they are planning to seal the borders with China and Pakistan so that there are fewer martyrs,” he said.

BJP spokesperson Dube expressed full confidence in the prime minister’s leadership. “The PM said I haven’t had the opportunity to die for my country but I want to live for it,” he mentioned.

Mishra, too, said that the surgical strikes had been planned very well and executed in close coordination with the defence ministry. “What orders the Indian Army gets are all political orders. The Army does not work independently,” he reminded the audience.

Raju termed the surgical strikes a “gamechanger”.  “The power balance has changed after the strikes. We have hit the flow of funds and arms into Kashmir from Pakistan. But most importantly, at international fora, we have been able to make ourselves be taken seriously. We have successfully convinced others that Pakistan is the source of terrorism. Even China has had to come around to a degree on this and the Pakistani foreign minister, too, has admitted that Hafiz Saeed and the Lashkar-e-Taiba are a liability,” he said.

Brigadier Mishra credited the government’s team of envoys for the advances made in the diplomatic arena.

The talk then shifted to the Border Security Force’s Operation Arjun and its impact.

Rajput said that both the Indian government and the Indian Army are progressing well towards their combined goal of ending terror. “If there is any requirement for course correction, the Congress will certainly convey it to the government. We will rise above petty politics as all parties are equally affected by terrorism,” he said.

Mentioning how a BSF jawan on vacation was shot dead at his home in Bandipora district in north Kashmir a day ago, Tyagi went on to ask the brigadier why the terrorists were aware of the movements of the soldiers.

“I am just back from a visit to the state. You have no idea how well the Army’s Sadbhavana mission is working there. The people of Kashmir are suffering a great deal of economic hardship owing to terrorism. All they want is freedom from terror,” he said.

But Sharma said that terrorists are continuing to harass those already in the mainstream and the latest incident was an example. When it came to rejecting terror, this was a disincentive, he said.