Views on news
Home Media Television “Who is VC Tripathi to settle the matter?” 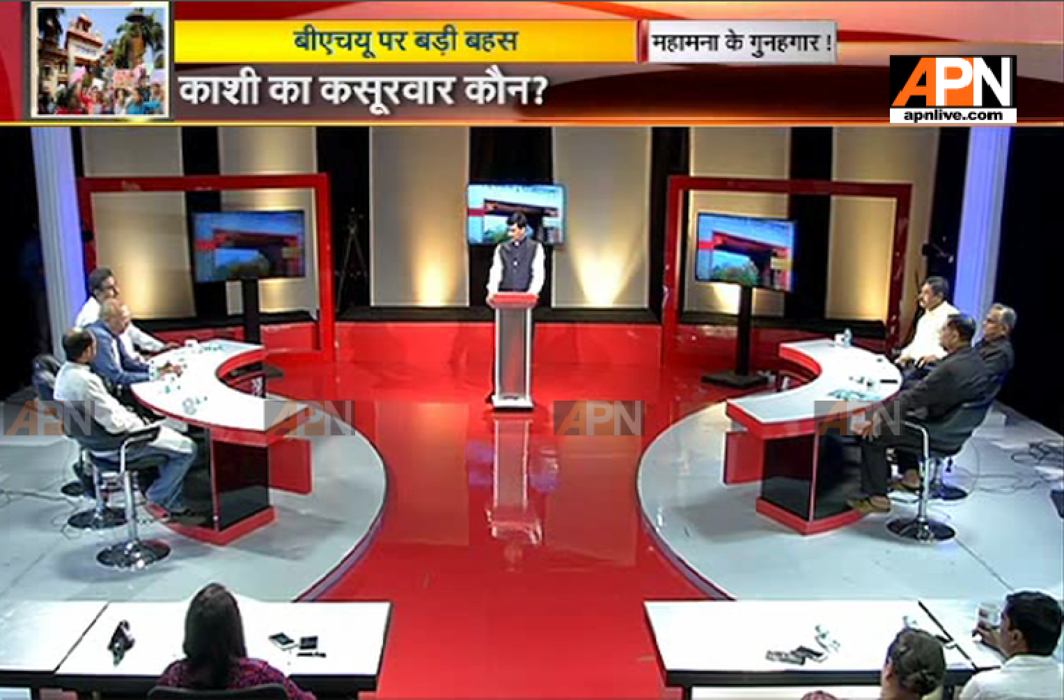 On Friday, APN conducted a special show on the BHU groping and lathicharge. The show was anchored by managing editor Vinay Rai and panellists included former judges, advocates, student leaders and political leaders.

The panellists debated the molestation of a girl student inside the BHU campus and the administration’s lackadaisical attitude in handling the matter which gave rise to protests. All of them unanimously condemned the administration and the Vice-Chancellor, Girish Chandra Tripathi.

Why had they let police inside the campus and how could the head of an educational institution with such a proud history have such a regressive mindset when it came to the rights of women?

Senior Supreme Court advocate Anup George Chaudhary said that in cases of molestation which is a cognisable offence, FIRs must be registered immediately. His colleague Pradeep Rai said that the VC is unfit for the post he is holding as he does not have the requisite qualifications. He also called out Tripathi for saying that “the matter had been settled”.

“Who is he to settle the matter? Judicial action must be taken in the matter. Why were the police allowed inside the campus? The students were protesting peacefully, only exercising their fundamental right. The VC must be sent to jail,” he said.

Captain Dwivedi, an ex-IAS officer, recalled how they have seen even worse times than the present but never were those handled so badly. He termed the incident as a dark chapter in the history of BHU. He told the audience how years back a student had shot his professor and committed suicide himself the next day, but then too it was handled sensitively.

BHU is the alma mater of many of India’s celebrated writers such as Kashinath Singh. Singh recalled his times in BHU and said that during his times the university had a students’ union and the students never had to protest for their demands because the union would always keep their grievances before the VC who always tried to resolve them. “There is a lack of dialogue which can be felt throughout the administration,” he said

Senior journalist Ram Bahadur Rai said letting police inside the campus was a serious mistake. He was of the opinion that Tripathi would not be forgiven by the students. He recalled how years ago a VC was ousted for anti-student measures taken by him. He said Tripathi, too, would meet the same fate.

Representatives from the student fraternity were also present at the show.

Omprakash Narayan, a JNU student and member of NSUI, was all praise for the girls who agitated for their rights. Nikunj Makwana, member of ABVP, meanwhile, brought up the matter of throwing of petrol bombs inside the campus which he said was equally concerning. To this Sharbat Jahan Fatima of Congress said it was the BHU administration that was responsible for it as the incident showed a clear lack of security.

Jahan also criticised the prime minister for not meeting the protesting girls despite being in the city. “Such agitations have not happened for the first time. Earlier too, when were sitting in protest in JNU against Indira Gandhi, the former PM met them and talked to them. Modi, too, could have talked to these girls,” she said.

Juhi Singh of the Samajwadi Party said that before fixing onus on anyone, it should be asked as to why the Vishakha guidelines were not applied by the university in this case and why BHU has no committee to deal with sexual harassment incidents. She also slammed the VC for his irresponsible statements amounting to victim-shaming.