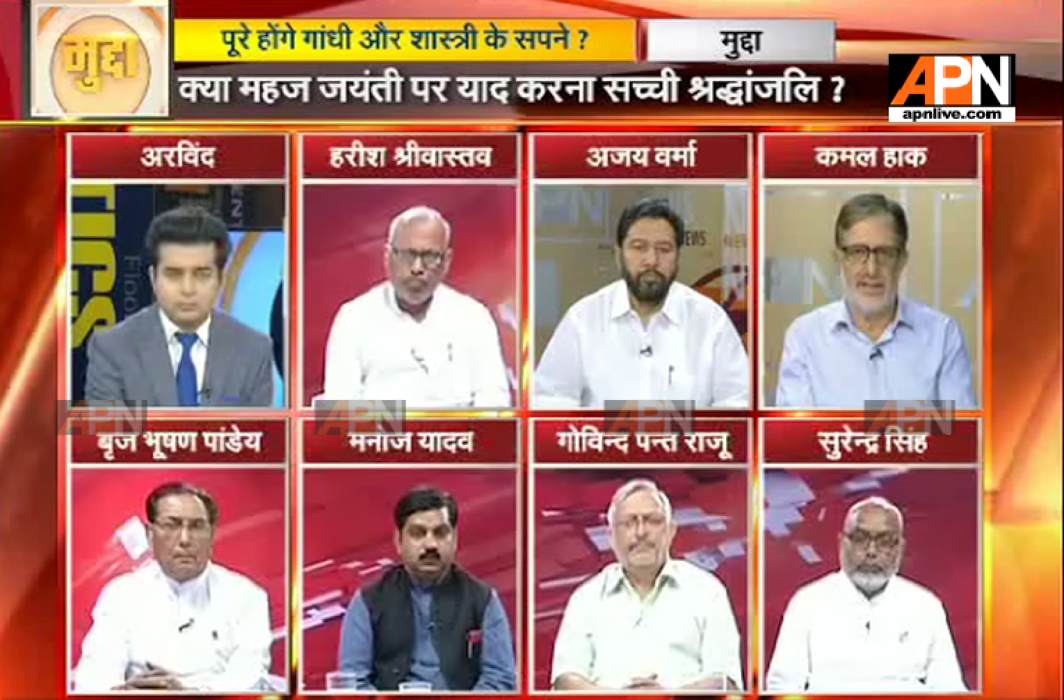 On October 2, when India observes the birthdays of the father of the nation, Mahatma Gandhi, and its second prime minister, Lal Bahadur Shastri, it is an occasion to recall the ideals of the two leaders and to assess how far we have succeeded in implementing them. APN’s popular debate show, Mudda, attempted to do this with panellists Manoj Yadav of the Samajwadi Party, Ajay Verma of the Congress, Kamal Haq of the Panun Kashmir, Brij Bhushan Pandey of the Akhil Bharatiya Gandhi Ashram, Harish Shrivastav of the BJP and Govind Pant Raju, APN consulting editor.
Brij Bhushan Pandey told anchorperson Arvind that, sadly, the two leaders are remembered only on October 2, respects are offered at their samadhis, and that is all. “The lives of the two leaders, the sacrifices they made towards India’s development remain in textbooks,” he remarked.
Ajay Verma said that what is needed is real, ground-level work. “The current dispensation only believes in talking loud, work hardly gets done. Gandhiji had said that untouchability is a crime against God and humanity, but who’s implementing Gandhian thought now, who’s doing anything for the farmers the way Shastri wanted?” he asked.
Govind Pant Raju stated that both Gandhi and Shastri were tall leaders of their times and people had faith in them. “At their call, the nation would respond, whether it was for satyagraha or farmers’ agitation. We do not have such leaders now who would think so deeply about the common man,” he said.
Kamal Haq quoted Albert Einstein’s famous words on Mahatma Gandhi: “Generations to come will scarce believe that such a one as this ever in flesh and blood walked upon this earth.” He said Gandhi has now become a commodity or a ritual. “When Shastri called, people gave up eating food…such simplicity of thought now is rare, and it now just boils down to hollow sloganeering,” he said.
Manoj Yadav said that on seeing poverty in India, Gandhi gave up his three-piece suit and came down to wearing just dhoti and chappals. He devoted himself to eradicating untouchability, poverty and spreading literacy. Such leaders are rare now, he said.
Harish Shrivastav said that Gandhiji lived the life of the poor, but leaders today are too selfish to do that.
The second part of Mudda was given to the upcoming visit of Congress vice-president Rahul Gandhi to Amethi. When the Amethi administration sent a letter to the district Congress chief requesting that Gandhi reschedule his proposed October 4-6 visit to the constituency, the Congress called the move “politically motivated”.
Ajay Verma said that the BJP is trying to thwart Rahul Gandhi’s visit.
Shrivastav said that the administration must have sent the letter advising postponement of the visit in view of the security issues involved, as he is protected by the SPG and there might have been fears of some threat. To this, Verma asked how come the visits of Amit Shah or Rajnath Singh are not viewed in such light? He added that there is a trend to stop Rahul Gandhi from visiting Amethi, and this is not the first time it has happened.
Putting things in perspective, Raju said that the leaders are making a mountain out of a molehill, and because the administration had sent the letter it gave the Congress an opportunity to cry foul. In a fresh communique, the district administration has given him the go-ahead, saying it has no problem if the Amethi parliamentarian visits his constituency. Raju said that the leaders should stop politicising each issue.