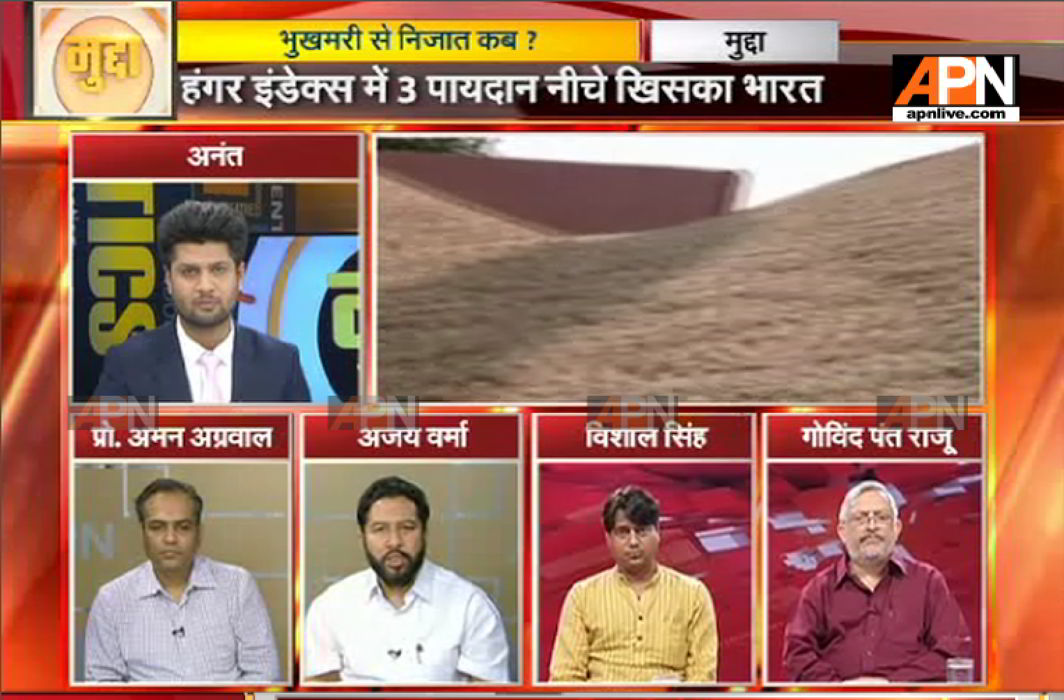 Sanjay Singh held the country’s growing population as the reason behind the pressure on resources. He also blamed Rohingyas and Bangladeshis for “eating up” the country’s resources. His Congress counterpart, Ajay Verma, said policies such as demonetisation have added to the economic burden.

According to Vishal Singh, the biggest problem is that policymakers have constantly failed to implement their plans on the ground level. “Only providing food is not sufficient, diet should also be taken care of. We haven’t been able to reach those desperately in need of attention,” he said.

Citing the example of Thursday’s football match between India and Ghana, Raju said that even after being better equipped than the Ghanaian players, the Indians lost 0-4. One of the reasons behind this is the better nutrition the Ghanaians are getting compared to the Indian players. “Sports is just an example; things would change only when the attitude of considering your citizens merely as voters changes,” he said.

The second edition of Mudda discussed the BJP launching Yogi Adityanath as a star campaigner in the Gujarat elections. This appears to be the BJP’s strategy of projecting its Hindutva image and consolidating its core vote bank. Before Gujarat, Adityanath also campaigned in Kerala with the state BJP leaders in the janraksha yatra. However, the yatra failed miserably with people criticising the BJP for maligning the image of Kerala.

Ajay Verma said that the BJP will not be able to run the country with its vision of a Congress-free India. “Being of BJP or Congress is a matter of the system but that aside, we are citizens as well. Your policies must be inclusive as Narendra Modi is our prime minister, too,” he said.

Sanjay Singh said Hindutva is the soul of secularism to which Manoj Yadav retorted that not Hindutva but the constitution is the soul of the country. He also questioned the BJP plan to run the country with Hindutva as its ideology. “Yogi is being used for the controversial statements that he has always been making. They are taking Hindutva to Gujarat,” he said. He also asked if the great Gujarat model which led the BJP to victory in the 2014 elections was enough for the party to win the Gujarat polls.