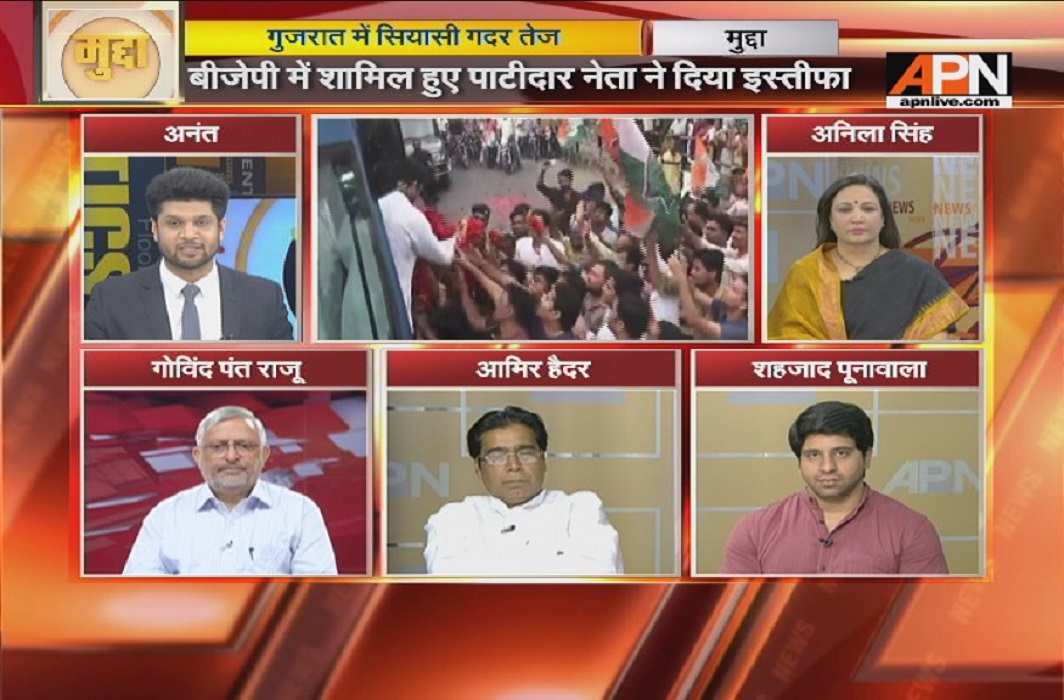 As the battle royale in Gujarat hots up, there is no end to the spate of allegations and counter-allegations being traded between the rivals. Patidar leader Narendra Patel alleged that he had been offered Rs 1 crore by the BJP to join. Following this development, Nikhil Savani, another Patidar leader and former aide of Hardik Patel, quit the BJP, saying he was “dismayed” by news of the saffron party offering money to Opposition leaders.

Earlier, the BJP had to eat humble pie when Congress leader Ahmed Patel bagged the Rajya Sabha seat in Gujarat. The state elections, scheduled for the end of this year, have managed to unnerve the ruling BJP and Congress leaders are making efforts to woo the voters. APN’s popular debate show Mudda discussed the Gujarat elections with panellists Anila Singh of the BJP, Amir Haider of the CPI, Shahzad Poonawala of the Congress and Govind Pant Raju, APN consultant.

Anchorperson Anant Tyagi started the debate by asking Anila Singh how worried the BJP was feeling vis-à-vis the Gujarat elections. Singh replied that the party has nothing to fear. She said that the PM himself hails from the backward classes, so the backward sections of the state know that their leader is with them. She added that the Patidars and the Jats, who have been agitating of late, were prosperous at one time. “Their agitation has been stirred by political leaders, especially the Congress,” she said.

Raju said that the Gujarat election is turning out to be a prestige issue for the PM because this is the first time that Modi is at the centre and away from state politics.

Shahzad Poonawala said that if the BJP felt confident, why was the prime minister going to the state for a yatra for the fourth time? He added that the cloth merchants, the jeweller community and the small businessmen in the state were unhappy with the BJP’s economic policies.

Singh said that the agitations of the Patidars and other youth leaders have been orchestrated by the Congress to serve their own interests. The state was calm and happy with the BJP till the Congress created trouble, she said.

When Poonawala raked up the issue of the BJP trying to bribe leaders like Narendra Patel, Singh said that the joke is on the Congress. “Why did Patel not show any audio or video clip of the bribe?” she said.

Haider said the allegation of bribe needed to be investigated. He said that the BJP is increasingly playing “politics of corruption”.

Raju said that caste has always played a role in Indian politics, so one can’t blame the BJP alone for wooing Patidars or the Jats.

After a break, Anant raised the subject of the unhappiness of the people regarding GST and note ban. Singh said that both have been strong steps taken by the BJP government to move towards a transparent economic era. She mentioned that the Congress, too, had thought of GST but could not implement it. She added that there are bound to be teething problems, and the people must bear with these. She said that after sometime it would become clear to all that they were good steps taken by the Modi government.

Raju said credit must be given where it’s due. “At least the BJP has been trying to make tax collection more transparent. It needs to be tweaked to suit all sections of the society, but still it is a bold move that must be appreciated,” he said.

Haider said that the people will soon give their verdict and their eyes are not shut.

With this, Anant, ended the debate.