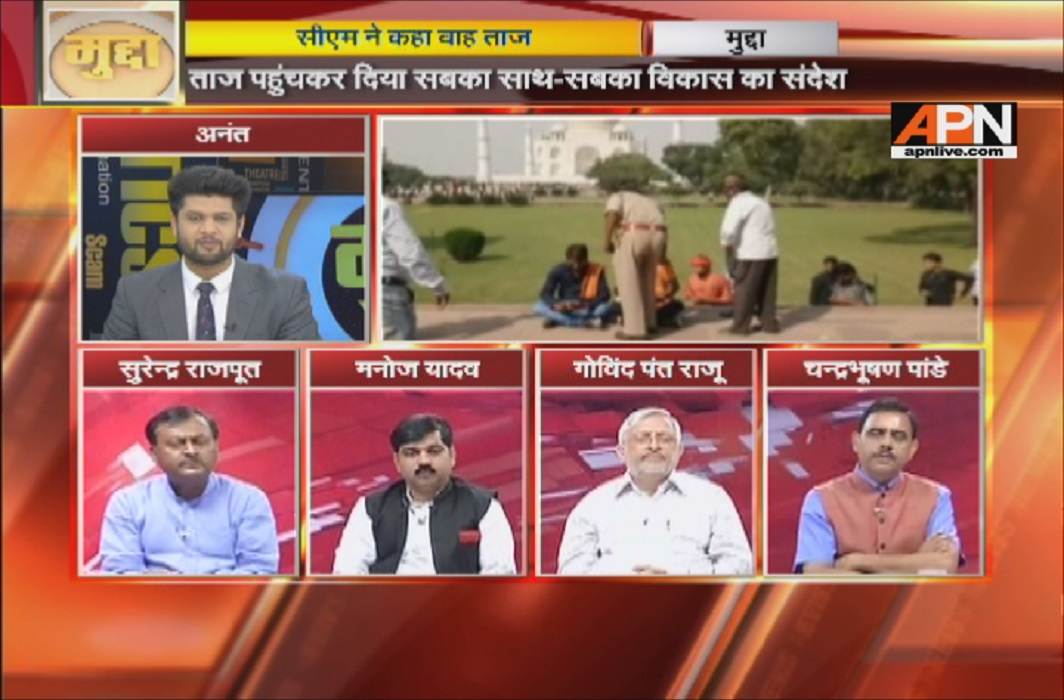 It began with the removal of the Mughal-era monument from the state tourism department booklet. However, days after BJP politician Sangeet Som’s controversial remark that it was a “blot on Indian history”—another party leader said that its real name is Tejo Mahal, as told by historian PN Oak—Uttar Pradesh chief minister Yogi Adityanath visited the Taj Mahal, ostensibly to promote the Swachh Bharat Mission, though experts termed it a damage control move.

Pandey began the discussion. He said: “The BJP stands for everybody’s support and development. Som is not our official spokesperson. His remarks are irrelevant. The Taj Mahal is historical and beautiful.”

Rajput said that BJP nurtures controversial people like Katiyar, Som, Sadhvi Prachi and Sakshi Maharaj for their power to win elections. “No steps were taken after the Taj Mahal was dropped from the heritage list. This is an attempt to divert attention from the Jay Amit Shah corruption issue. No action was taken in the Baghpat or Mathura case, either. Tesla withdrew its project from Agra due to these controversies,” he said.

Yadav accused Yogi Adityanath of turning a blind eye to the real issue. He said the Yogi is visiting the Taj now so that revenue doesn’t dry up. “The BJP is playing the Hindutva card. Ram has been our deity since time immemorial but only BJP has used it for electoral gains,” he said.

Bhatt felt that there is no proof of PN Oak’s theory of Tejo Mahal. “Oral history is now being granted importance,” he said.

Raju reminded the audience that Oak is the same person who once said that The Ka’bah is a Hindu temple. “The central government is serious about its efforts to preserve the Taj which is evident by its introduction of the Gatimaan Express in Agra to boost tourism. It is the state government which has made the situation prone to communal tensions,” she said.

The second half of the Mudda discussed the celebration of Kashmir Vilay Diwas by the BJP on Thursday. On October 26, 1947, Maharaja Hari Singh, the ruler of the princely state of Jammu and Kashmir, signed the instrument of accession on J&K. Security expert Brig RB Sharma (retd) joined the discussion.

Sharma said: “Such political steps are being taken from time to time. Earlier, there was wrong assessment of the tension due to lack of objective inputs. But the issue can be discussed now. Stone pelting in the valley has decreased.”