Views on news
Home Media Television “As we increasingly talk about a global village, Article 35A looks outdated” 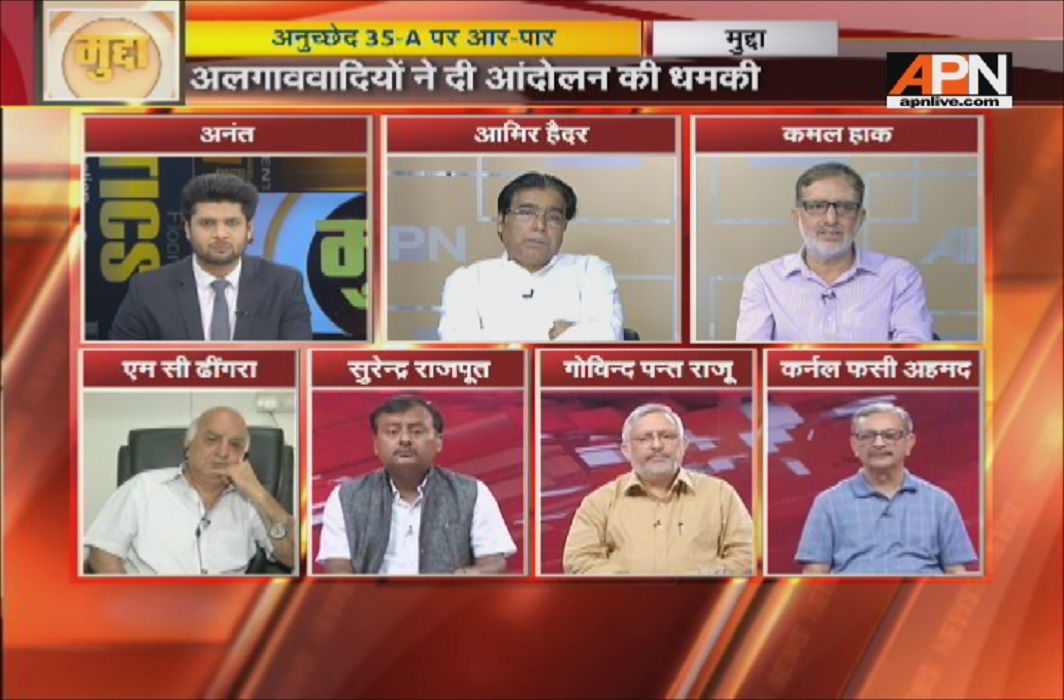 Article 35A empowered the J&K constitution to define “permanent residents” of the state. It was added to the Constitution through “Constitution (Application to Jammu and Kashmir) Order, 1954,” issued by the President under Article 370. The issue is politically volatile as it involves the “special status” provided to the state.

As the Supreme Court took up a clutch of petitions challenging the constitutional validity of Article 35A, the matter was up for debate in various circles. APN’s popular debate show, Mudda, took up the issue with panellists Surendra Rajput of the Congress; Ashwini Upadhyay of the BJP; Amir Haider of the CPI; Col Fasi Ahmed, defence expert; Kusum Sehgal, senior journalist; Kamal Haq, J&K expert; MC Dhingra, senior advocate; and Govind Pant Raju, consultant editor APN.

Anchorperson Anant started the debate by asking the first question to Kamal Haq, who said that the Article came into force nearly 70 years ago, when it had a special context, as the issue was of too many foreigners residing in Kashmir. Since then, the political and social reality has changed, and the time has come to revise it, he said. “As we increasingly talk about a global village, Article 35A looks outdated. Also it raises the sensitive issue of discrimination against women since girls who do not marry Kashmiris, are not allowed to hold assets in the state. It’s lost in a time warp,” he said.

Surendra Rajput said that the BJP needs to make its stand clear as the Congress, over the years, has diluted many objectionable sections of the said Act.

MC Dhingra said that Article 35A defeats the provision of Article 14 that deals with the subject of discrimination.

Amir Haider said that the issue is of a sensitive nature as it involves denial of rights to daughters who get married to non-residents of Kashmir. Kusum Sehgal said that daughters of Kashmir cannot be treated in a different way from daughters of the rest of the country.

Col Fasi Ahmed said that it is a draconian Act. “How can there be two sets of laws within India?” he asked.

Govind Pant Raju said that the discrimination angle needs to be set right. He also said that over 6,000 non-Kashmiris, who were residing in the state, were denied voting rights which is strange because they are as much citizens of the country as anybody else.

Dhingra said that the President may issue an order for a special status to a certain state, but not so much that it is violative of equality of the citizens of the country.

Ashwini Upadhyay said that it is certainly “illegal and invalid”.

Surendra Rajput said that there should be an atmosphere of cordiality when such things are being debated at the national level and parties should not try to politicise such issues.

Kamal Haq pointed out that there is the humanitarian angle that needs to be considered seriously. At the time of Independence, there were thousands who came from Pakistan and decided to reside in Jammu, taking up menial jobs like scavenging, etc. “Under the provisions of Article 35A, such people have been denied the right to vote, the right to get government jobs, and so on,” he said.

Dhingra said that there is an anomaly in the provisions of Article 35A. All provisions of discrimination are wrong, and no state can get such powers.

Raju pointed out that after the Article came into force, it was kept well entrenched into the system because different political parties saw an advantage in keeping it. “We should welcome the Supreme Court decision to take up such black laws that are anachronistic,” he said.

Col Ahmed said that comparing the issue with Yemen, Palestine, etc (as some political leaders have been doing of late) is wrong. “Kashmir is an integral part of the nation and Article 14 cannot be violated,” he said.