The final Oscar—Best Picture—was announced by presenters Warren Beatty and Faye Dunaway as La La Land, the favourite film to win. Except that it hadn’t. As the cast trooped onto stage and thanks began to be given, it was discovered that the wrong movie name had been read out. Moonlight had won. Warren Beatty was apparently handed the wrong envelope.

There were very few surprises. Casey Affleck won Best Actor for Manchester by the Sea and Viola Davis won Best Supporting Actress for Fences. Iranian director Asghar Farhadi’s The Salesman won the Best Foreign Language Film. He was unable to collect his Oscar in person because of Donald Trump’s visa ban. Priyanka Chopra was on the red carpet and eight-year-kid Indian actor Sunny Pawar of Lion won hearts and was lifted up by host Jimmy Kimmel during the ceremony.

Original Screenplay: Manchester by the Sea

Best Costume Design: Fantastic Beasts and Where to Find Them 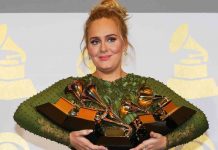 Adele is the greatest!