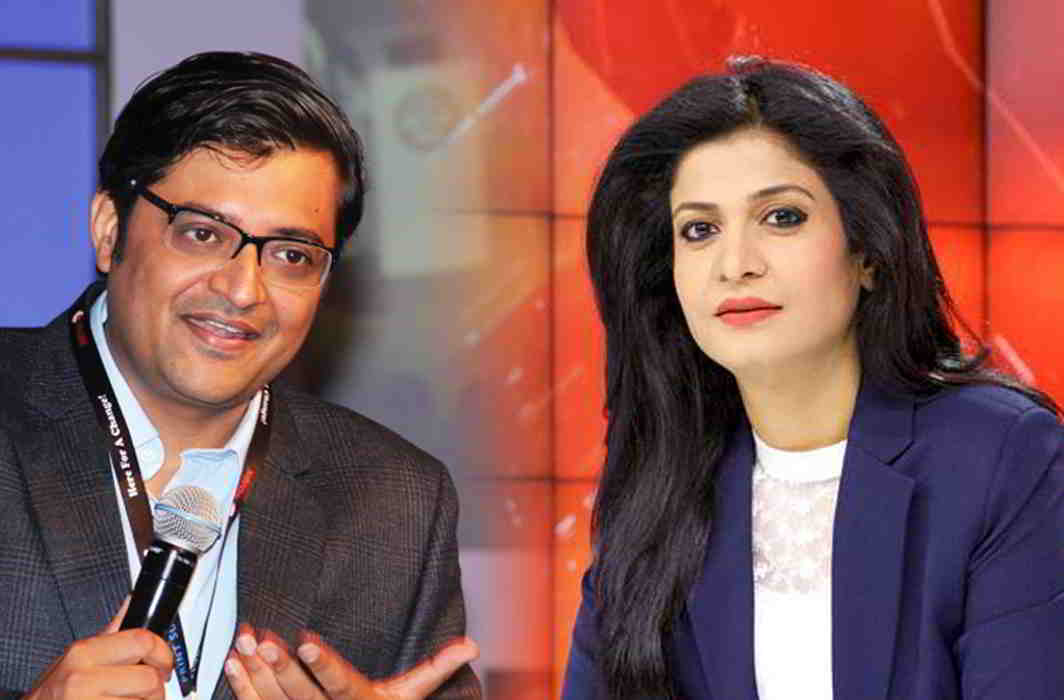 Right now, it’s the battle of the billboards, but very shortly, when the enfant terrible of English television news, Arnab Goswami, comes roaring back in his Republic avatar, it could become a more unequal contest.  What the billboard battle reveals is the cut throat competition for eyeballs among English news channels. The billboards, which appear side by side in prominent locations (most noticeably at the entrance to Film City in Noida where a majority of TV channels operate from) shows a promo for The Republic with a photo of Arnab looking his aggressive best while alongside is another promotional ad for India Today TV featuring Anjana Om Kashyap, the replacement for recently departed Karan Thapar’s prime time slot. Republic’s ad line reads: ‘Arnab with you soon. ’ The India Today tagline is: Anjana reached and waiting.’’ It all seems a bit over-dramatic and hyped but that is the nature of the television beast.

Indeed, stripped of the hype, it’s really a no-contest.  For those who are not in the loop, Anjana was, till last week, unknown among those who regularly watch English television news. She was an anchor for India Today’s Hindi television channel, Aaj Tak, where she had a regular show called Halla Bol. She was shifted to India Today TV when Karan Thapar’s three year stint as anchor of his own show came to a mysterious end last week. While speculation still swirls around the reasons for his departure (he had riled a lot of powerful people with his inquisition-type interviews), the move to pit a virtual unknown in the English television media space against the man who claimed to be its king, Arnab Goswami, has created much comment and hilarity on social media. One member of the Twitterati compared it to a lion and a lamb. That is still to be seen but the real issue is competition and the naked grab for viewership in which anything goes. India Today‘s aggressive promotional campaign pitching her as a direct competitor to Republic TV shows how desperate channels are to retain their ranking. Republic is launching in the next fortnight, but without the formidable backing of The Times Of India group and its deep pockets. Arnab’s main backer is Rajeev Chandrasekhar, the Bangalore-based entrepreneur and Rajya Sabha MP who is an ardent fan of Prime Minister Narendra Modi and is considered extremely close to the BJP. Arnab’s parting with Times Now was not pleasant at all, and Vineet Jain of the Times Group has done everything in his power to undermine the birth of the Republic [sic].

That is what makes the coming battle so intriguing. In the TV trade, what counts are TRP’s or a version called weekly impressions, which is defined as the ‘number of individuals of a target audience who viewed a segment or episode, averaged across minutes’.  The television industry’s bible is called BARC (Broadcast Audience Research Council), the body that measures television viewership. BARC’s current data shows that Times Now is still the most watched English news channel, a fact that the anchors and promos keep hammering home at every opportunity. It’s a message generally meant for advertisers but the singular point the promos make is that Arnab’s departure has not affected the channel’s popularity or viewership.  Whatever the truth of that claim, it is number one in the genre but the entry of an old-new player in the game could rock the ratings boat. In that sense, the ones who need to worry about the impact of Republic will be NDTV, currently number two in the ratings, with India Today along with Anjana coming in a distant third in the ‘’impressions’’ game.  Fourth place is occupied by Mukesh Ambani-owned CNN News 18.

Where Republic fits in to that ratings hierarchy is the million rupee question. There happens to be a twist in the tale. Times Now has slapped an injunction against Republic which says that the phrase ‘The nation wants to know’ which Arnab made his signature line, is a Times Now patent since Arnab was employed by them at the time, and has banned him from using the phrase.  Knowing him, Arnab will merely use a variation of the phrase since his battle with the Times has grown increasingly bitter during the 16 months since he left, or was asked to. What the nation really wants to know is whether the 16 months of abstinence will make a difference and whether viewers of English news channels—a fraction of Hindi news viewership—will still find vicarious pleasure in watching his daily screaming matches and hyper nationalism. Here’s the thing. Every channel has developed an Arnab clone since his extended sabbatical started, so his hectoring and hollering is no longer unique and neither are the guests screaming to be heard. It’s a formula now, and everyone—with the notable exception of NDTV—is using the same playbook. Republic needs to make an instant impact to get back among the ratings. Judging by all that Arnab has been saying these past few months, his ideology and nationalist aggression will be extant. Whether the viewer for that kind of overhyped television news-as-drama still exists in large enough numbers is the unknown factor.  At the end of the day, Arnab’s biggest rival is Arnab himself, and not the unheralded and untested Anjana.