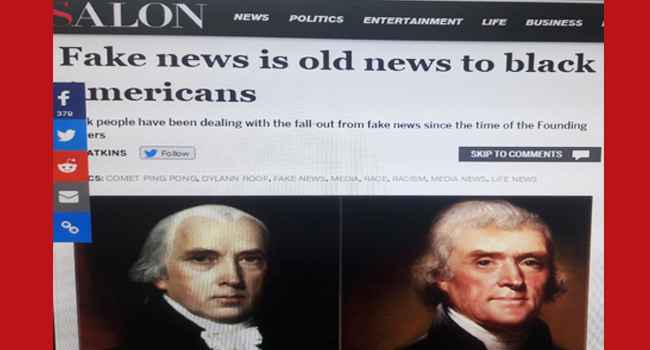 Social media in the United States, especially post -Donald Trump-victory in the presidential election, is abuzz with talk of fake news. Social media, a favourite of Trump, who has had a running battle with the liberal media in the country, and who believes that he has outflanked the ‘biased’ television news channels and newspapers, through Twitter, is seen to be the main conduit of fake news.

In India we have heard of ‘paid news’. That is, information on behalf of a politician amounting to advocacy on behalf of, or support for, him or her, is which should have gone as an advertisement in return for payment, is used in the news columns and it is paid for. This violates the basic ethic of news, which is taken to be fact. But ‘fake news’ is a different kettle of fish altogether. Here, individuals, place posts based on hearsay and without critical fact-checking, and it gains a momentum of its own, as people repost it and it spreads like wild fire.

The USA Today newspaper has quoted a Pew Research Centre survey conducted between December 1 and 4; that 16 per cent of people admitted that they shared online political news which turned out to be fabricated, that 14 per cent knowingly shared a ‘fabricated news story’.

Most of these posts were on Facebook, and Facebook, it is reported, is working on the problem of detecting ‘fake news’ posts.

But some conservatives seem to believe that the whole ‘fake news’ controversy is the creation of the liberal media which wants to retain its monopoly over news and it feels threatened by alternate news sources emerging online.

The online Politico Magazine has carried an in-depth story on the phenomenon of fake news, , tracing its brutal beginnings to 15th century in Italy, which led to violence against Jews. A long-standing television network, CBS, too has carried an analytical piece about the issue of fake news. The argument is similar. Fake news is not new, but in these high-tech times, the “delivery systems” are. Salon, an ultra-liberal online news site, has carried another critical piece, about fake news and now it has been around for longer than one ever suspected it to have existed, especially when it came to America’s blacks.