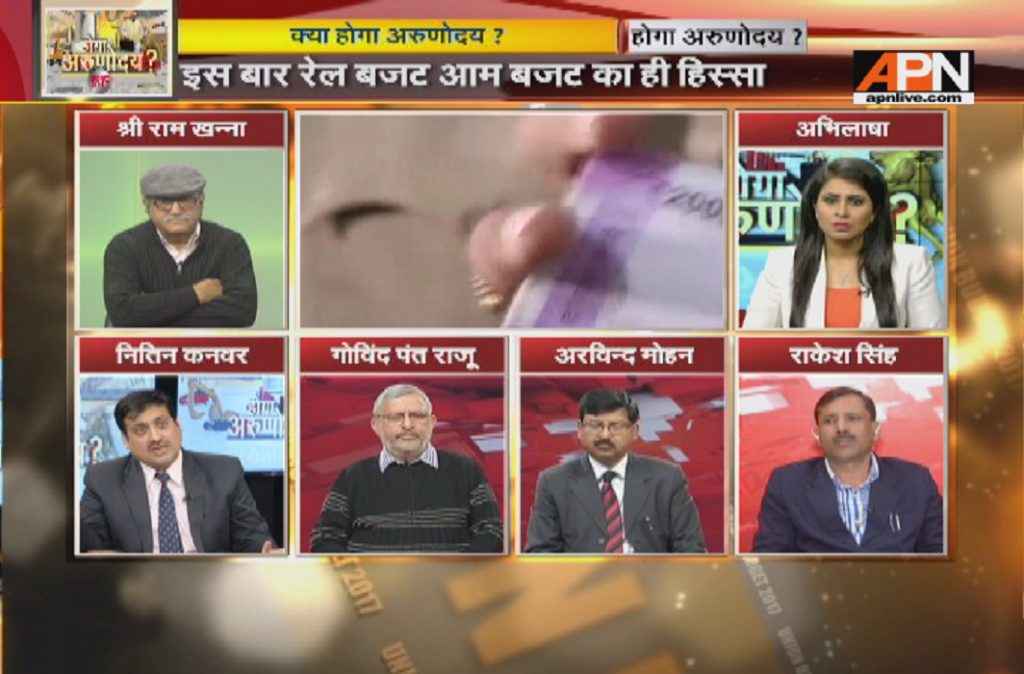 Looking ahead at the Union Budget, APN experts conclude that whatever the other factors in the document, it was essential to boost the farm sector for inclusive and overall growth.

The show was anchored by Abhilasha.

The show dealt with a number of viewpoints, not just from experts on the panel, but also from the aam admi on the street. It was a show that took into consideration the aspirations on the street, demands on Finance Minister Arun Jaitley, and reflected what really the people want.

The first was to guess what kind of a budget will the FM place on Tuesday. Would this be a populist budget, to soften the blow of demonetisation a bit? Before the experts started on their analysis, the camera went to many on the streets and got the following feedback.

A lady said it would be nice if there was an LPG subsidy specifically for women.  One respondent was hoping that the Income Tax exemption would be hopefully raised to Rs 5 lakh. Another said he hopes home loans were made easier and that there is a big tax rebate on it.

Yet another caught the bull by the horns when he said he hopes the government provides on digital payments – now that this is a less-cash economy. And the political viewpoint from the public was that there should be no sops for poll-bound states in the Budget.

Raju said that there were “high expectations from the people, because people were under a lot of pressure from demonetization. This is likely to be a farmers’ budget as they were among the worst sufferers.”

Anchor Abhilasha queried on the possible options. “Could there be new tax slabs?”

Nitin held a strong view on demonetisation and said: “This was not Notebandi, but just Notebadli. It was just a change of currency notes. I think pensioners might get tax exemptions: 3 lakhs may be raised to 5 lakhs. Benefits under Sec 10, ETPA.”

His view was clear. He said it is “likely to be a need-of-the-hour budget, rather than populist one.” He said there are likely to be benefits, under sections 54F and 54. “Capital gains tax exemption limit in certain cases may be raised.”

Rakesh Raman was asked if he thinks this would be a farmer’s budget. He said: “There is a 2.1 to 2.2 % growth rate in rural areas as compared to 6.8 to above 7% for the rest of India. To make the primary sector grow, we need higher allocation. This can stop farmer suicides. It is necessary to revive the sector. One must remember that farmers are consumers as well as producers. The decline in allocation has impacted them badly.”

Economist Arvind Mohan painted a starker picture, when he said: “Growth rate in rural areas has been 1.8% for the last few years and last year it was 0.5%. It is a structural challenge; we could not sustain growth or solve the employment problem. Our high growth has been a jobless growth. We must focus on agriculture and rural employment generation and hence there is a need for policy shift.”

Kabra said the suggestion of a Universal Basic Income (51% of the population in villages are daily wage labourers) “will be a great step”.

Said Arun Kumar: “The economic survey projections not correct, this is a problem for policy making. Growth can’t be between 6.5% and 7% as is being projected. You must understand that 50% of India work in agriculture; another huge proportion works in the unorganized sector. These two areas must be the focus areas.”

Regarding the taxation, the professor said: “Increasing tax is not a wise decision from the macro-economic point of view. Employment generation should be another focus area.

“This year the economic survey has faced a problem in that the Nov-Dec data has not yet been calculated and it must be factored in for the right results.”

Arvind Mohan said: “For the first time, there was no detailed presentation of economic survey in Parliament. NITI Aayog has been releasing it through press conferences. What I can say is that we must focus on rural development.”

Said Nitin: “This year’s budget will be direct tax-related (because GST is a constant, effective from April 1). The government would want to spend money to revive the economy. So it has to increase the tax base. Digital economy will bring more people in ambit of direct tax.

“GST will plug loopholes and achieve the same effect. MAR credit may be raised from 8 yrs to 10 yrs. Fat tax may be imposed on sugar and beverages. Banking Cash Transaction Tax may return. SCT, CTT rates may be increased.”

He also said that “corporate law amendment on cards as Income Cash Disclosure Standards they want to do away with.”