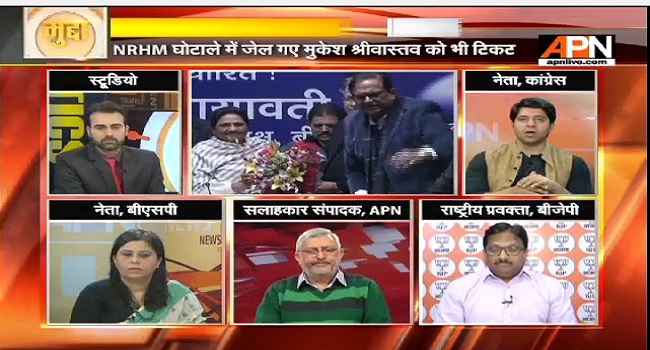 The ticket distribution of political parties for the Uttar Pradesh assembly elections has exposed a stark reality – tickets have been given to partymen with criminal backgrounds. In such a situation, the promises made by these parties of not supporting criminality in politics fall flat. Also, judging by the lists that have been released, it is clear that nepotism is still rampant in UP politics. Ambika Chaudhary resigned from the Samajwadi Party (SP) to join the Bahujan Samaj Party (BSP) and was given a ticket on his first day in the party. In the SP list, the names of the current 20 MLAs are missing and sources say that more leaders could resign from the SP, including aides of Mulayam Singh Yadav and Shivpal Yadav. The list includes names of those accused of rape and murder which has raised questions about Akhilesh Yadav’s earlier stance on removing criminality from politics and going to the elections purely on the basis of development.

Saturday’s edition of Mudda, APN’s daily current affairs talk show, discussed the presence of criminals among the candidates whose names are on the SP list and how this factor is going to affect the party in the polls. The show was hosted by anchor Himanshu Dixit and for the discussion were present Congress leader Shehzad Punawala, BSP leader Ritu Singh, BJP national spokesperson Sudesh Verma and APN Consulting Editor Govind Pant Raju. The SP’s Naved Siddiqui also joined in via the phone.

Dixit began the show by seeking Raju’s opinion on the inclusion of candidates with a criminal record in the SP’s list. Raju said: “During the last elections, Akhilesh Yadav had dropped DP Yadav and had raised the issue of eliminating crime from politics which was a well-planned political move as he was aware that DP would not be able to win the elections and it would not affect the party in any way. By doing so Akhilesh tried to improve his image and distance himself from the traditional style of his party but the fact is that nothing has changed in the party and it seems Akhilesh wants to follow the same traditions now.”

Asked about various parties’promises to stay away from criminals, Punawala said: “In the BJP’s list of 149 candidates, there are names of candidates with a criminal record and as far as the Congress is concerned, we have always believed in giving tickets to deserving and clean candidates.”

In reply, Verma said that the SP had always been known as a party of goons and it was only the BJP which could fight corruption. He avoided the question about Narendra Modi’s statement on removing nepotism from politics. When asked about the inclusion in the party list of Keshav Prasad Maurya, who has 17 cases against him, Verma said that it was a political issue and false charges had been framed against Prasad in most of the cases. He also added that the Congress had lost its identity in politics.

Singh stated that the BJP won’t be able to form a government on its own while agreeing that criminals should not be given tickets.

Siddiqui commented that it is the public which likes and chooses the candidates and blame can be appended to anyone to which Raju replied that all the political parties have tit-for-tat replies to back their selection of candidates with criminal backgrounds. Verma added that the BJP has a distinct identity in comparison with other parties as far as parties being involved in corruption and caste-based politics are concerned. On this, Punawala and Singh sounded united as they raised allegations against the BJP.

Punawala pointed out: “There has been no proposal for electoral reforms by the Prime Minister. He had promised before coming to power to clean up politics and set up fast-track courts to punish guilty politicians. This is because the BJP wants its criminal candidates to continue contesting elections.”

Verma replied that electoral reforms were the BJP’s priority and it is the opposition which does not wish to talk it out in the parliament.

Asked for his concluding comments and whether he sees all of this ending in the near future and how voters are going to perceive this, Raju said: “The public is watching everything and they will show it just like they did during the last elections by not bringing bahubalis to power and as far as political parties are concerned, they do play blame games but they all practise the same kind of politics when it comes to giving tickets to shady candidates.”