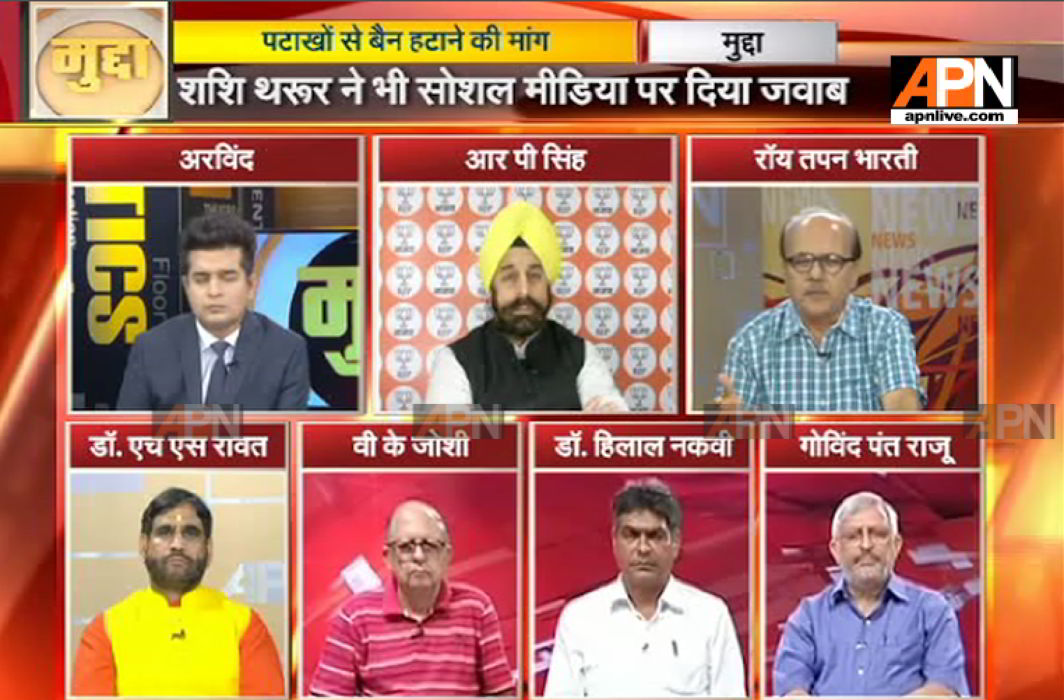 Panelists discuss the economic fallout of note ban and GST; also discuss whether the firecracker sales ban by the Supreme Court in NCR was not extreme and the likelihood of its success

Economists and critics have started mounting pressure on the government, saying that the promise of a good economic growth looks shaky. World Bank, in its report, has said that India’s economic momentum has been affected by disruptions from the withdrawal of bank notes and uncertainties around the Goods and Services Tax (GST).

Not sounding too optimistic, Bharti said that the government should have woken up last year after the effects of the note ban started trickling in, and it became clear that the common man was unhappy with it. He said whatever gains the government expects from its policies of note ban and GST, they won’t be seen fast enough. “Concise plans are needed to boost all-round economy,” he said.

Naqvi said that in the earlier dispensations, the approach was broad-based and people had better purchasing power, the manufacturing industry was slow but upbeat, and employment generation too was also slow but upbeat. He said that so far the effect of note ban has yet to be seen. The government should have done some test drive before rolling out the GST plan, he said, adding that as of now, the tax structure was too high.

Chandra Bhushan Pandey said that the Modi government has ushered in a vibrant economy. The FDI is expected to zoom to more than 400 billion dollars. Both the GST and the note ban have been big decisions taken by the government, meant to streamline the system and collect more tax.

Raju said that there is no doubt that the aim of the government has been to arrest black money and to bolster the economy. “The government wanted to be with the common man. Both the decisions required courage and the government cannot be faulted on that front at all,” he said.

Bharti said that various governments have been hoping to try out the idea of GST, but such decisions need to be taken with a lot of caution. On the one hand, the government is willing to spend Rs 80,000 crore on Bullet Train but, on the other, the overall government budget is only Rs 16,000 crore. “What if the tax collection slows down? There is no doubt that the government is fearful at this stage,” he said.

The second part of Mudda took up the Supreme Court’s decision to ban the sale of crackers in Delhi. Some members of the civil society feel that, when there is already a National Green Tribunal to address environment issues, why did the SC have to impose the cracker ban?

Hindu leader HS Rawat said that the cracker ban interferes with the right to religion as burning crackers is as important in Diwali as lighting lamps.

RP Singh said that the cracker ban affects the environment, religious sentiments and business. He said on the pollution scenario, everyone should welcome the move though he questioned why the ban is only till November 1. He said that though sale in Delhi has been banned, e-business of crackers is flourishing. He said that a comprehensive policy is needed to check pollution.

Naqvi asked Singh that when his party is in the government how come it has not devised any comprehensive policy to check pollution.

Singh said that the Delhi government should come out with a policy to check the pollution, and not the central government. To this, Naqvi pointed out that the environment was a central list subject and the ball should not be put in the state’s court.

Raju stated that the issue is of environment alone, and the cracker ban should not be seen from a religious perspective.