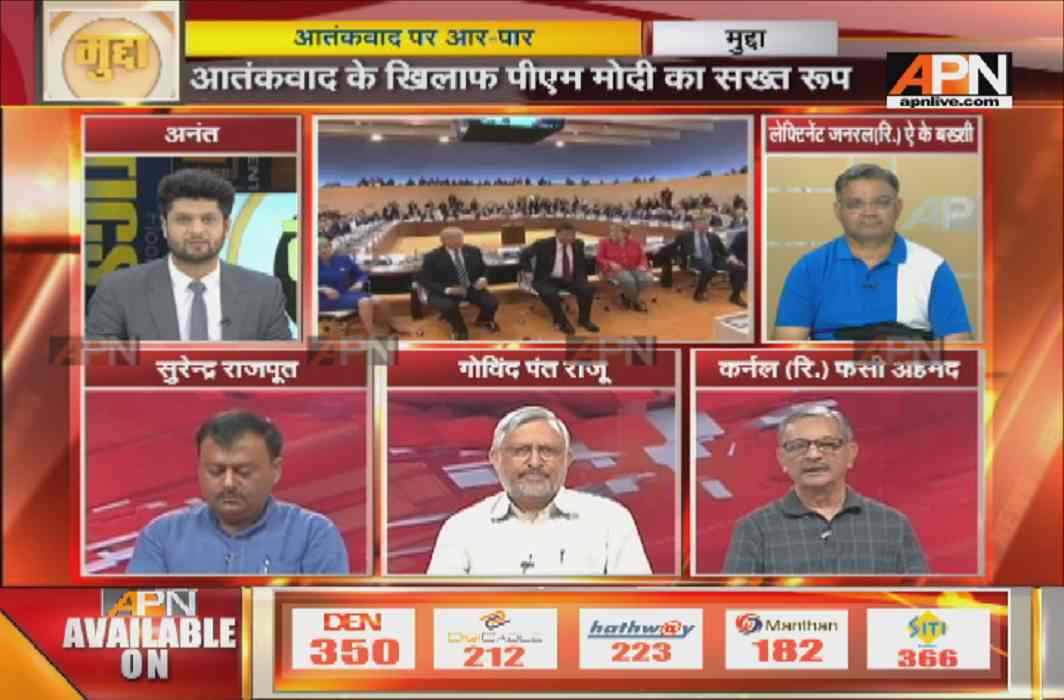 Saturday’s edition of Mudda discussed Prime Minister Narendra Modi’s speech at the G20 summit in which he made a radical suggestion—that government functionaries from countries that support terrorists be barred from entering G20 countries.

Moreover, he hit out at Pakistan as he named terror groups LeT and JeM along with global scourge IS and Boko Haram to drive home the point that some countries use terrorism as a tool and that the outfits are united by a common ideology despite different labels.

Looking to take the lead on terrorism, Modi also presented an 11-point action agenda for fighting the global menace as he made a clear reference to Pakistan when he said “some nations are using terrorism for achieving political goals.”

Col Ahmad (retd) opened the discussion, saying that this G20 summit is a significant platform for discussing  and raising global issues like terrorism. “I appreciate the fact that PM Modi spoke about this issue as India is one of the victims of terrorism.”

Lt Gen Bakshi (retd) stressed the fact that the G20 summit is held only to discuss world economic issues such as trade and international relations. “If one looks closely, earlier in Turkey when G20 was hosted the issue of terrorism was kept on the main list for discussion but in Germany it was kept in a retreat.”

“It is not necessary that each international forum should discuss terrorism issues, but the initiative and stand that India has taken during this summit is commendable,” Lt Gen Bakshi (retd) added.

Meanwhile, Raju was of the view that the two-hour unofficial discussions on terrorism underline the fact that all the nations attending the G20 summit are suffering due to it.

Rajput said, “The Congress open-heartedly welcomes the initiative that the PM has taken at the summit.”

Sharma commented that since the BJP-led NDA government has come to power in 2014, Modi has time and again raised the issue of terrorism. “For instance, when the PM went to the US for the first time, in his speech he spoke about terrorism and clarified that there is no ‘good’ or ‘bad’ terrorism.”

When asked about the India-China rift on Doklam, Dutt said that it would be foolish of India to expect any kind of peace talks with China. “For China, Pakistan is more important than India as they are building the China-Pakistan Corridor (CPEC). I expect India to adopt appropriate strategies and actions in order to resolve the issue,” Sharma added.

The second part of Mudda looked at the CBI raids on Lalu Prasad Yadav’s premises and his relations with Bihar CM Nitish Kumar at present.

Outraged by the CBI raids, RJD’s Naval Kishore alleged that it was political vendetta by the ruling BJP. “This is a classic example of political vendetta and the BJP is doing it because it is afraid of the rally which will be led by Lalu on August 27 at which the entire opposition is expected to come together against the BJP.”

Evading a reply, Sharma said that his party is not involved in any kind of political vendetta and is against corrupt people. “We will continue to take stringent action against the corrupt people.”

Rajput wrapped up the discussion and said the CBI always works in tandem with the ruling party. “But under Modi rule, the BJP is doing it shamelessly.”