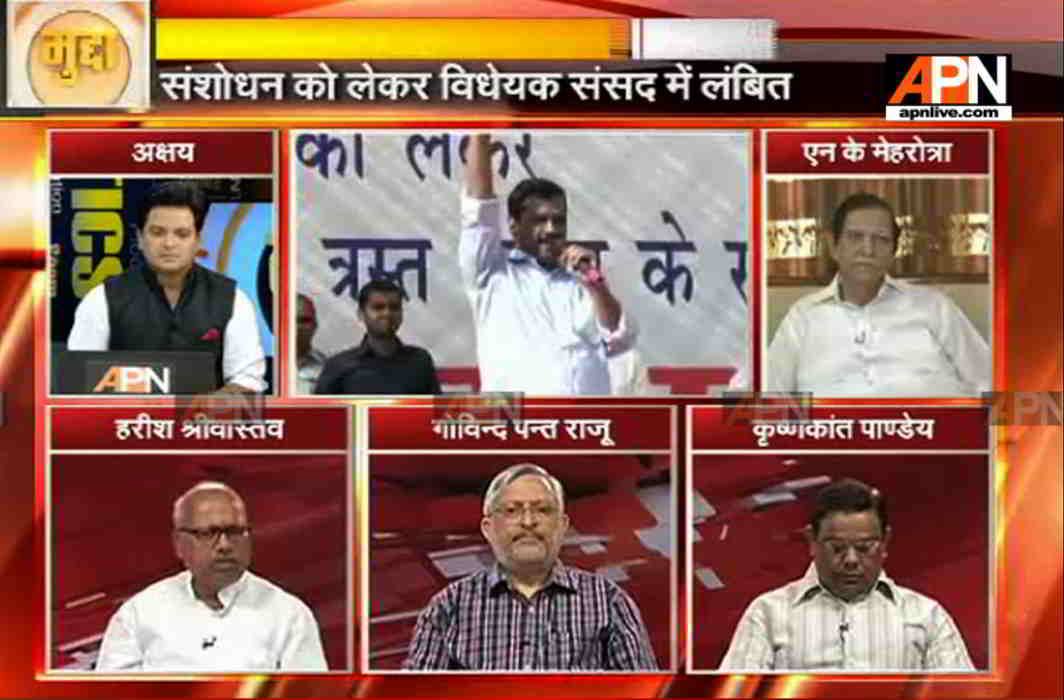 Friday’s edition of Mudda, the daily current affairs talk show of APN, looked at the Supreme Court’s stating to the government that a Lokpal can be appointed even without an opposition party leader. An opposition party can only be recognised as such if it gets a minimum of 10 percent of the 543 Lok Sabha seats, which is 55. Technically, the Lokpal committee requires a member from the opposition too but currently the second largest party, the Congress, has only 44 seats. The issue has been hanging fire with no government really interested in appointing an ombudsman.

Raju said that when the Lokpal movement began, the BJP supported it in a major way but now, when there is a technical bottleneck, the government does not seem interested in solving it. Even the opposition does not seem to be interested. If all the politicians are interested “in earning corruption money” there is no need for them to implement it, he said.

Malhotra was of the view that no legislator would like to have an organisation which would keep them under check. However, he pointed out that there are only a few countries in the world where there is no ombudsman and India being one of them is a shame for us. Also, in states where a Lokpal has been appointed they have not been given sufficient teeth to carry out their work promptly. As a result “just appointing a Lokpal will not make the situation better,” he said.

Pandey pointed out in the end that, according to a report in the Indian Express, corruption has increased by 76 percent in the past three years. How will a government have a positive attitude and pave the way for an ombudsman if it is itself corrupt, he asked. He also said that it was the Congress which had implemented RTI which helped in weeding out corrupt politicians.

The second session of Mudda was based on the Uttarakhand High Court’s decision to seal the Electronic Voting Machine (EVM) at Vikasnagar. The High Court also issued a notice to the Election Commission of India, the State Election Commission, and the chief secretary along with the BJP candidate who won the election after a plea was filed by the Congress candidate.

Shrivastav also opened the second part of the discussion and stated that he would not like to make any comments on the decision of the High Court. However, he took a dig at the Congress by stating that they were making a hue and cry about the same EVMs which helped them win several elections. Why did they not complain when they were in power about the faulty EVMs, he asked.

Pandey responded by stating that the first charges about faulty EVMs was made by BJP ministers LK Advani and Subramanian Swamy after they lost the 2009 elections. The Supreme Court gave a judgment stating that the machines were not faulty. Now the matter is with the High Court so let it decide whether there is any fault or not, he said.

Malhotra said that an EVM can be manipulated in this digital age so that is not a question. The question is whether there was manipulation and it is good that an independent body is probing this.

Raju concluded the discussion by pointing out that the Election Commission has thrown a challenge; if a person is successful in manipulating an EVM then it is a major worry. The problem in Vikasnagar is not related just to the EVM issue but to other election malpractices as well, he said.