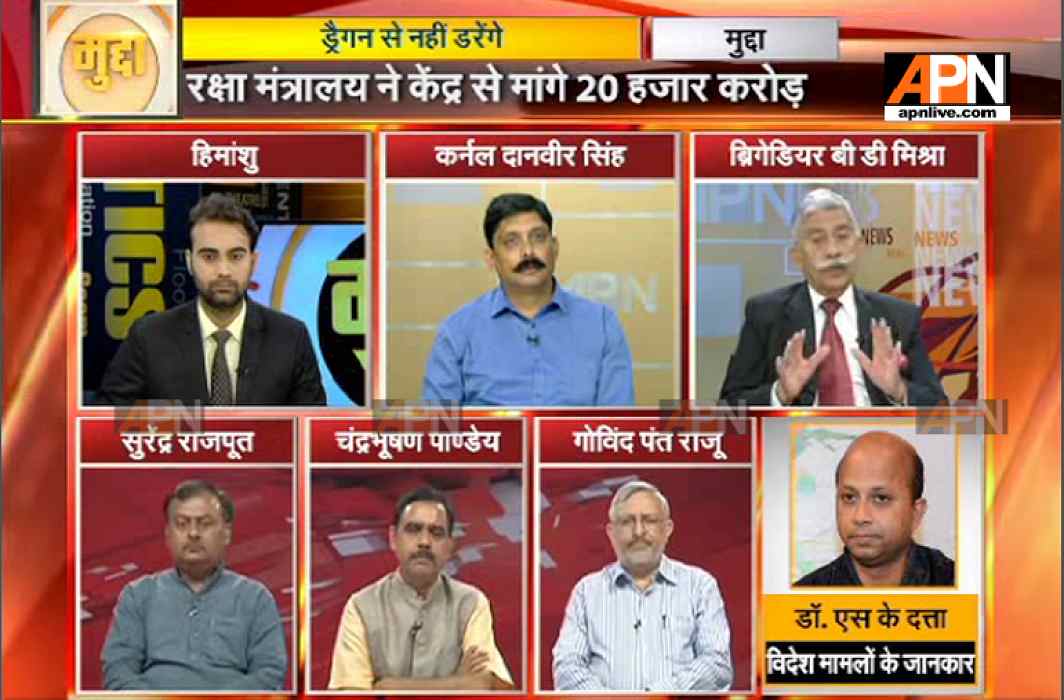 On APN Mudda, Chandrakant Pandey slams outgoing vicepresident, says he has criticised a system of which he is himself a beneficiary

BJP leader Chandrabhushan Pandey has called outgoing vice-president Hamid Ansari a “ranga siyar (jackal dyed indigo)” for speaking out on behalf of Muslims in the country who, he said, were experiencing “a feeling of unease” amid a rapidly-intensifying atmosphere of cow vigilantism, superstition, intolerance, lynchings and mob violence. He made this statement at Mudda, the daily current affairs talk show on APN channel.

August 10 was the last day in office for vice-president Hamid Ansari who has occupied it for 10 long years. Only one other vice-president has enjoyed as long a tenure as Ansari’s—Sarvapalli Radhakrishnan. In his last interview on the job, given to Rajya Sabha TV, Ansari has ascribed the spate of vigilante violence, mob lynchings, beef bans and “Ghar Wapsi” campaigns to a “breakdown of Indian values” and to the “breakdown of the ability of the authorities” to enforce the law. “…and overall, the very fact that [the] Indianness of any citizen [is] being questioned is a disturbing thought,” Ansari said.

Mudda on Thursday set out to debate the urgency of this statement but ended up debating the purported motivations behind issuing it, thanks to Pandey’s allegations.

Pandey, the BJP spokesperson, opened the debate, saying “it is very unfortunate for a person of his stature to make such a statement at a time when democracy has struck deep roots in the system and all constitutional posts are being occupied by persons of high merit.” “I never read about the illustrious president Zakir Hussain making such a statement. Ansari is a beneficiary of this system which values merit over faith and caste. He has turned out to be a ranga siyar, who can’t help himself from aligning with the narrow interests of his community. Yeh retirement ke baad apne liye rozgar talashne ki koshish hain. (This is only an effort to find positions for himself post retirement,” he said.

Both the other participants in the debate disagreed with Pandey. “If someone uses his constitutional position to discuss these very valid concerns on a government forum, it is unfair to call him such names. Then even Modiji is a range siyar because he has been protecting the interests of the Sangh Parivar. He has every right to say what he has said,” said Rajput from the Congress. He also very relevantly termed Pandey’s approach a diversionary tactic saying that it amounted to kutark (filibuster) which caused debate and discussion (tark and vitark) to take a back seat.

Raju said the government must pay due attention to his statement, while adding that he had made it only in reply to a journalist’s question and given the facts, “his answer could hardly have been anything else”. “It is not a controversial statement,” Raju asserted.

However, Pandey continued to dispense his specious logic that undermined Ansari’s comments. His stand was, in fact, no different from his party colleagues. Shahnawaz Hussain, the Muslim face of the BJP, said “there is no better country for Muslims than India and no better friend than Hindus”. And Priti Gandhi, who is member of the BJP national executive, tweeted something to the effect of this: “India, a Hindu-majority nation, elected Ansari to the second highest office in the land, and accepted him—a Muslim—with open arms, so why does he still feel uneasy? Why would he speak about Muslims in India feeling uneasy?” “Agenda kya hai? (What’s the agenda?),” she asked on Twitter.

To top it all, incumbent vice-president Venkaiah Naidu joined the chorus of criticism, which in itself was quite the ungracious thing to do. “Some people are saying minorities are insecure. It is a political propaganda. Compared to the entire world, minorities are more safe and secure in India and they get their due,” Naidu told PTI.

Meanwhile on the show, Pandey even slammed Hamid Ansari for opining, in his interview, that triple talaq is a “social aberration, and not a religious requirement”.  “He shouldn’t have tried to guide the Supreme Court on triple talaq. He should stay within the limits of his office,” Pandey said, insinuating that his reply to that question had breached protocol, without saying so outright.

As Rajput had predicted, no debate took place on the issue Ansari had flagged for the attention of the nation—growing social insecurity among Muslims—during his last days in office.