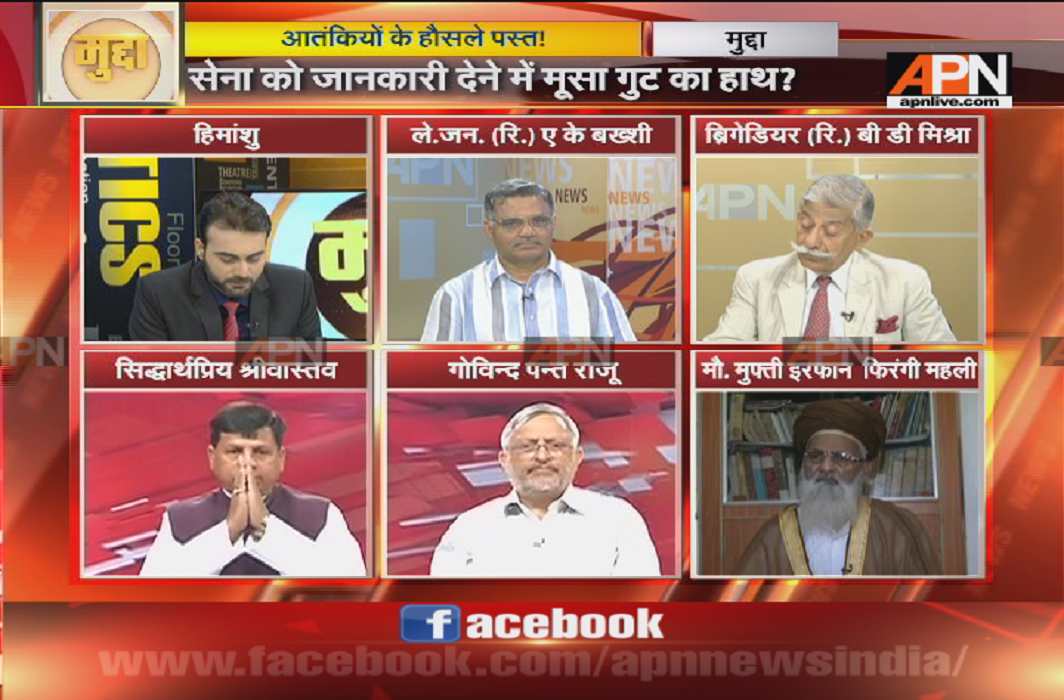 Starting the debate, Gen Bakshi said that not much should be made of Musa’s  “trouble-seeking” audio clip. The expelled Hizbul militant seems to be a “puppet”, he said. “He has tried to bring the spotlight onto himself, to crown himself in glory before the militant leaders,” he said.

Brig Mishra said that Kashmir has been on the boil since 1989. The militants have succeeded in banishing four lakh Pandits from the state. “Musa seems to be a successor of late Hizbul leader Burhan Wani. ISI gives money to miscreants for stone-pelting incidents, etc. The problem is that these miscreants rake up religion, and then create trouble. It is certainly a disturbing trend,” he said.

Maulana Mufti Irfan said that Muslims do not follow the religion that is being propagated by the militants. “Islam is a religion of love and not war. Muslims do not want to create hatred,” he declared emphatically.

Rana said that our nation has a long history of love and acceptance, which goes back more than the last 70 years. “Ever since the British Raj, or the Mughal era, Indians have wanted to live in peace and have countered violence. Whether it is Ravana, Kansa or Osama, Indians have criticised destabilising elements that instigate violence. These militants have lost their mind, they are not Indian,” he said.

Shrivastava said that whenever there is a weak government, the militants manage to create trouble. “Pakistan will always create trouble. Delhi needs to send a strong signal,” he said. The political leadership right now is obviously weak, he said.

Raju said that he agreed with Gen Bakshi that Musa’s audio clip is in the nature of self-propaganda. “By discussing Musa in the media, we are also helping his cause in a way,” he pointed out. He said that Musa obviously does not know Indian Muslims well; their “culture is Hindustan”, non-violence and they are not militant.

Gen Bakshi said that when dealing with a strong enemy, there is “need for unity in diversity”. “Our political parties need to bury the hatchet and show a united front while dealing with the enemy,” he said. “Army camps were set up in Poonch in 2003, so irrespective of whichever government has been in power, the militants have managed to creep in,” he stated. “Musa’s statement is a minority statement. It is time to show unity, not indulge in party politics,” he said.

Brig Mishra said that there are two points to take note of. One is that the Army has the mandate to finish off the militants in Kashmir; and the second is that the Indian Muslims trust the integrity of the nation.

The Maulana said that Muslims can give their life for the nation. The government needs to finish off all the divisive elements. “Kashmiris need to feel secure; that is the responsibility of the government,” he said.

Gen Bakshi said that the army is only going to control the violence, and to create a peaceful environment for the administration to do its work. He said: “First, it is important to disconnect Pakistan and the Hurriyat; two, we have to deal with pseudo-intellectuals who propagate hatred; and thirdly, the government needs to create job opportunities and boost the development agenda in the state.”

Part two of the debate took up the issue of the Congress’s strategy and the recently-held CWC meeting. Shrivastav said that the Congress had many things on its agenda, like the presidential polls, the upcoming polls in Gujarat and Arunachal Pradesh, and its organisational issues. “The Congress is well aware of how to counter Modi as there are bad reports coming from many states,” he said.

Rana said that the Congress should first look at its own record of 60 years, instead of looking at Modi’s three years in power.

Raju said that the Congress needs to overhaul in a big way and “not look like a party without aim or focus”.