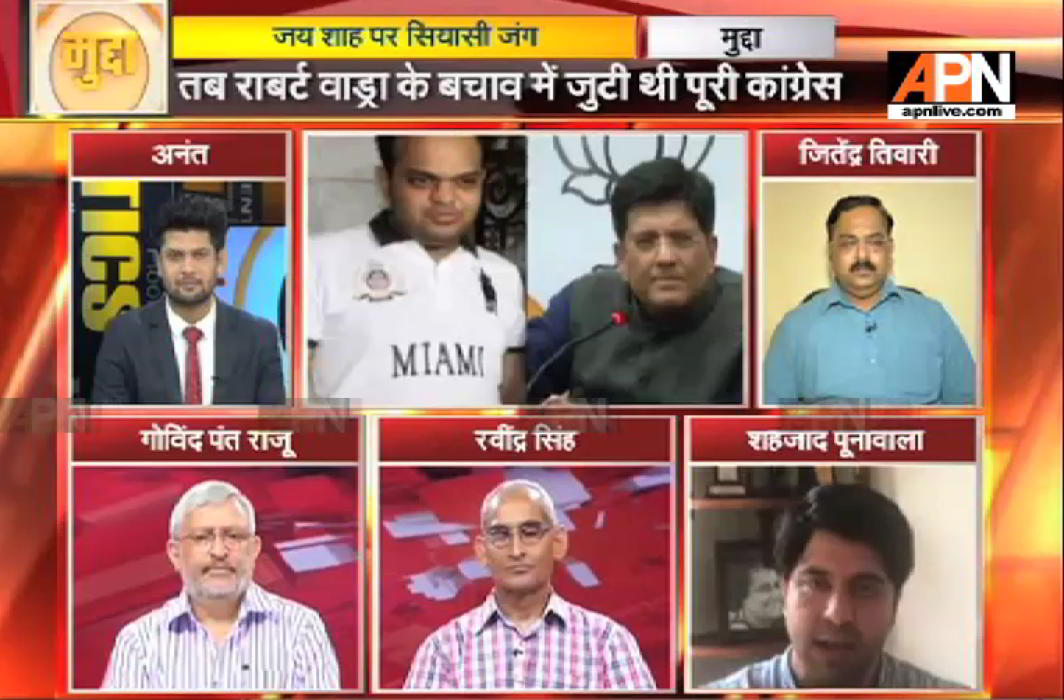 Panellists feel that a thorough investigation is needed to bring more clarity, as party spokespersons get into war of words with each other

With news circulating that BJP president Amit Shah’s son, Jay Shah has seen a dramatic increase in his business turnover since Narendra Modi became prime minister, the heat is on for the BJP. Following publication of the report by digital media outlet The Wire, Jay Shah, owner of Temple Enterprise Private Ltd, slapped a Rs 100-crore defamation suit on the website. A fierce war of words has now begun between the ruling party and the Congress, with AAP and others also joining in.

APN’s popular debate show Mudda also took up the issue with panelists Shahzad Poonawala of the Congress, Jitendra Tiwari of the RSS, political expert Ravindra Singh and consulting editor Govind Pant Raju participating. Anchorperson Anant Tyagi rightly observed that the issue had so exercised the BJP that Union minister Piyush Goyal felt the need to call a press conference over the issue despite the fact that it was a personal matter of Jay Shah.

Tiwari mentioned that The Wire had earlier done a story on Amit Shah’s huge wealth, then issued a clarification on it, and finally gone on to even delete the story. “How come there is nothing about Robert Vadra in The Wire?” he said, putting it down to “false propaganda by the Congress”.

Raju agreed with Tyagi that the fact that Goyal had to call a press conference over the issue even though Jay is not an official member of the BJP speaks volumes.

Poonawala pointed out that it’s wrong to say that The Wire has not written on Vadra. “How come a PSU gave such a big loan to Jay Shah? His business which is one of import and export of agri-commodities has nothing to do with energy. The matter needs to be investigated,” he said.

Ravindra Singh also said that an investigation needs to be ordered to look into the allegations.

Poonawala reiterated that he wanted to know how a PSU advanced a loan to Jay Shah.

Raju stated that the opposition heat is definitely going to be on the Shahs and a probe should be ordered.

The second part of Mudda concentrated on the visits in Gujarat of Congress vice-president Rahul Gandhi, BJP president Amit Shah and Union minister Smriti Irani. Reports have come in that Irani and Shah will visit Amethi to launch schemes and projects, three days after Rahul Gandhi’s visit. Clearly, the political parties are leaving nothing to chance in the high-profile constituency and in the PM’s home state.

Poonawala said that the anti-incumbency factor must be playing on the PM’s mind which is why he has been making repeated trips to Gujarat. He is more nervous than anybody else, he said.

Raju said that Rahul Gandhi’s Gujarat visit shows that the Congress wants to put up a serious challenge to the BJP.

Singh said that the Gujarat result will be like a litmus test for the BJP, which is why there was huge publicity around the bullet train launch.

Raju said that the BJP wants to put pressure on the Congress in Amethi so that it finds it hard to retain its seat.