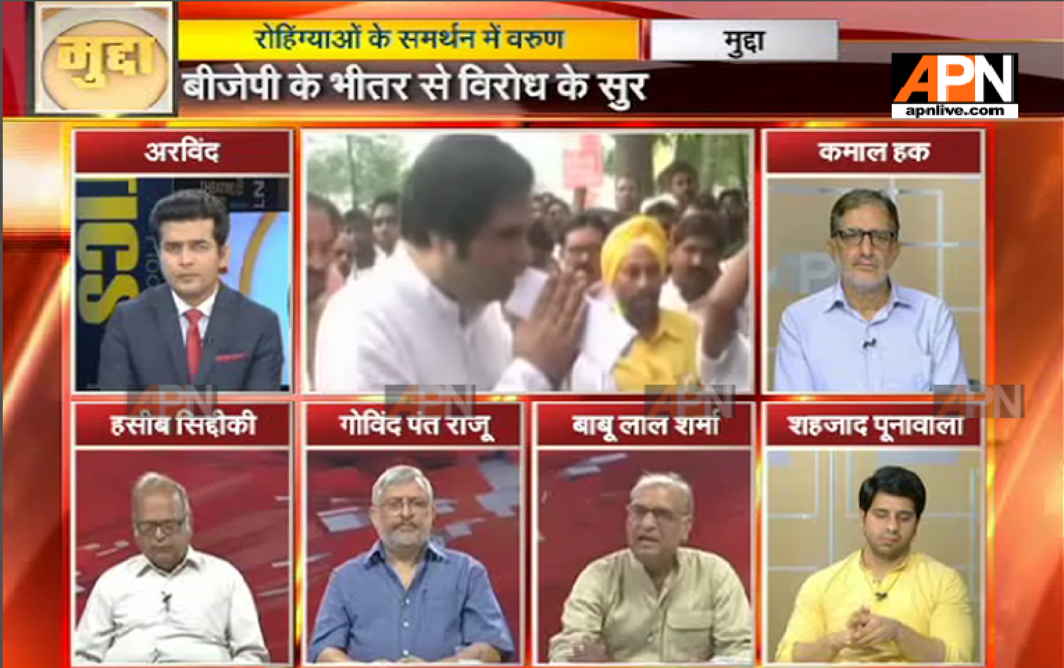 Mudda panel discusses voices of dissent from within BJP

Wednesday’s edition of Mudda was, as usual, in two segments but the trigger for the topics was the same – the  voices of dissent from within the BJP against the party’s past or present policies. The first part discussed ex-Finance Minister Yashwant Sinha’s article, published in the Indian Express, on the failure of the demonetisation move and the second part looked at Varun Gandhi’s essay on the crisis that the Rohingyas are facing and India’s stand on it. The debate was attended by Govind Pant Raju, consulting editor of APN; Shehzad Poonawala, Congress leader; Haseeb Siddiqui, political analyst; Kamaal Haq, spokesperson of the Pakhtoon Kashmir; Rai Tapan Bharti, economist; Babu Lal Sharma, Sangh thinker. The debate was anchored by Arvind, who also said that in spite of many efforts to invite a spokesperson from the BJP to answer questions no one had agreed to appear on the show.

Rai Tapan Bharti lauded Yashwant Sinha’s piece “as very insightful,” calling him “an experienced economist.” He said: “Sinha has torn to bits Modi’s demonetisation benefit promises.” According to him, this should help the opposition find its feet. As for GST, he said: “It has not been implemented well. GST is good and so many countries have implemented it but people are facing extreme anguish as the economy of the country has been shaken and the government needs to do quick course correction.”  He also warned that “any government which has implemented the GST in their countries has never come back to power.” He also asked: “Why was the GST implemented in such a rush?”

According to Haseeb Sidhiqui: “The 1% of the cash that did not come back into the system as per the RBI report, was just small sums that people had hidden in cash for a rainy day, not black money.” He also said that “people are losing faith in the governance and policies of the government.” He said: “Indira Gandhi had this invaluable quality of accepting her failures which PM Modi does not; neither does he take anyone’s advice.”

Poonawala used word play on the Hindi word for economics – arthshastra – saying: “Ek hota hai arthshastra doosra anarthshastra” (There is a science called economics and then there is disaster). Without spending too much time criticising, he said he would like to share facts and data: “Between January and April 2017, 15 lakh jobs were lost in the formal sector. The Gross Capital Formation is at its lowest in 10 years. Credit Rate Growth is suffering the same fate. The GDP, due to demonetization, has dropped by 2%, which has resulted in a loss of Rs 3 lakh crore, and farmers and small businesses are the worst affected by all this.” He said that what ex-Prime Minister Manmohan Singh had said in parliament post-demonetisation has happened. He said he would like to advise Modi to “bring relief to small traders under the GST after consultation with economists and to not make it an ego issue.” He said: “The PM should also accept that demonetisation was a failure.” He said: “The PM should not just make life easier for big businessmen by giving them stupendous loan waivers, while the Tamil farmer sleeps naked on the roads.” He also pointed out the hike in fuel prices and the burden this places on the common man, saying: “The way we wanted to implement GST was very different.”

Raju said: “GST was not the brainchild of this party but of the Congress. This party showed courage jn implementing it and also did it for its own image promotion.” “However,” he said, “the real impact of GST will take time and it is too soon to deliver our verdict on it.”

In the second segment, Raju said: “The Centre’s affidavit on Rohingyas concerns those refugees who are already living in India, whereas Varun Gandhi’s piece is on how to treat those fleeing Myanmar right now.” However, after making this distinction, he said: “The fact that such articles are being written shows that people within the party are finding it hard to be heard and are resorting to such pieces to get their voice across.”

Kamaal Haq said: “The Rohingya issue is an old problem that started way back at the time of India’s independence and again when Bangladesh was made independent.” He also said: “We can see that in the history of India many a time the refugees have overtaken the native population and even though it is good to be empathetic, in the long term we need to act with care.”

Babu Lal Sharma was outright with his opinion, calling the Rohingyas “not refugees, but intruders.” And “very vulnerable to brainwashing by terrorists.” He said all refugees “must be registered properly and their past history profiled.” He said: “We cannot trade in our national security for the sake of the Rohingyas.”

Poonawala said: “First and foremost, we need to pressure the government of Myanmar to take care of the Rohingyas.” He objected to the term “intruder” used by Babu Lal Sharma, saying: “We never called Hindus seeking asylum in 1971 intruders, we never even called the Sri Lankan Tamils who fled to India intruders or terrorists, and the same for Parsis.” He said: “People calling refugees intruders are just judging them on the basis of their religion.”

Siddiqui said: “We need a uniform national policy for refugees irrespective of the religion of the refugees.” He also said: “Varun Gandhi’s nomination was once cancelled by the courts for saying something quite hurtful against a particular religion, so why is the same person writing this piece for Rohingya Muslims,” he asked. He expressed agreement with profiling and supervision of the refugees.

The end of the debate saw Haq and Poonawala locking horns over the issue. The former asked: “What is the guarantee that the three-year-old Rohingya entering Indian borders today will not be a threat when he turns 20?” The latter counter-questioned: “The LTTE assassinated our ex-PM, Rajiv Gandhi, what is your guarantee that one who entered as a child then will not kill another PM now?”