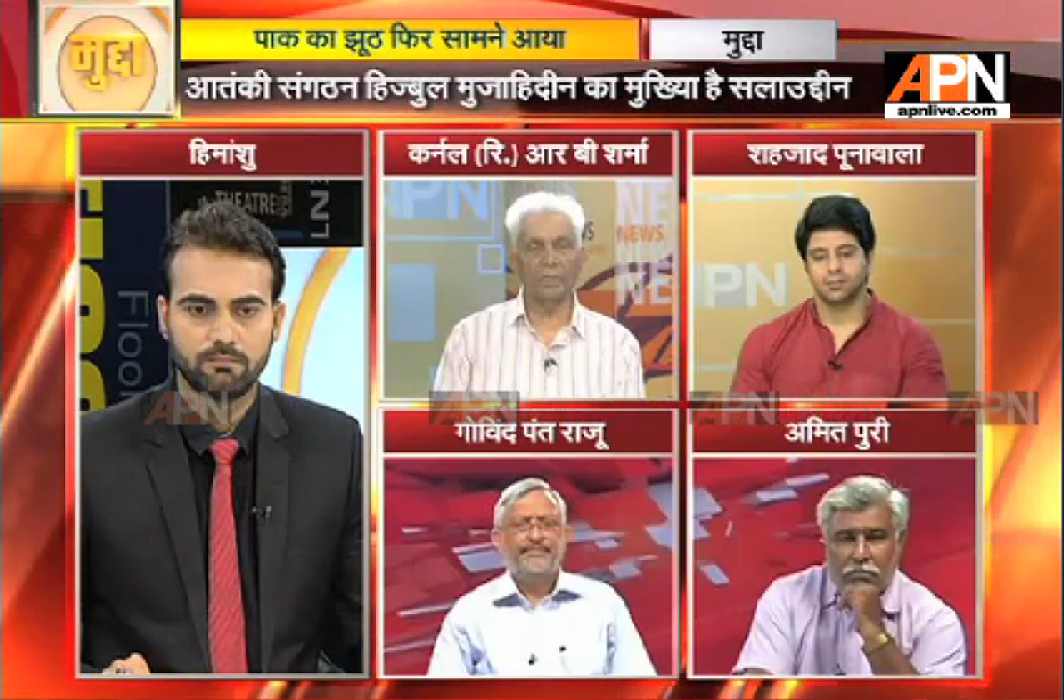 On June 27, the US declared the Pakistan-based Hizbul Mujahideen leader Syed Salahuddin a “Specially Designated Global Terrorist (SDGT)”. After that, on July 3, Salahuddin accepted, in an interview to a Pakistani news channel, that he did carry out numerous terror attacks in India, especially in Jammu and Kashmir. He even said that he will not stop till Kashmir becomes independent of India.

Sharma said: “What Salahuddin said in the interview is known to all.  It will not have any big impact on India. It will affect the international fraternity, though. Pakistan’s name has been defamed. I think he has personal reasons for doing it. As for India, we all know where the money that funds terrorist activities comes from, how these networks function and we have put restrictions on those fronts. All we have to do is to improve what we are already doing.”

Puri, on the other hand, accused Pakistan of harbouring and funding terror. He added: “India is tolerating this for quite a while. In the last three years the Indian government has strengthened its policies against terrorism. Terrorism has been a topic of discussion in our bilateral talks. We brought it up in UN conventions and discussions in international fora. Pakistan has always denied that it shelters terrorists and has tried to put the blame on India. But now it has come from the horse’s mouth. It is clear that Pakistan is aiding terrorism.”

Poonawalla raised questions about the Indian government’s inactive role in tackling the Hurriyat leaders who are accused of spreading terror in J&K. He further said that Rajya Sabha MP Rajeev Chandrashekhar had once tabled a bill in the parliament to designate Pakistan as a “terrorist state” which was discarded. Poonawalla asked for the bill to be considered.

Raju concluded: “It (Salahuddin’s statement) would not have any big impact on Pakistan except that international pressure on the country would increase to tackle terrorism. One should not be so quick in blaming Pakistan. The situation is such that Pakistan has no other option than to give shelter to these terrorists. Declaring any country a terrorist state would be gravely wrong.”

The second half of Mudda discussed the issue of alleged siphoning of funds by Akhilesh Yadav’s sister-in-law, Aparna Yadav, in the name of her NGO, Jeev Ashray Gaushala. An RTI query by activist Nutan Thakur revealed that nearly 86% of the grant sanctioned by the Samajwadi Party government for organisations working for cow welfare in Uttar Pradesh went to her NGO. It has also been revealed that a government office was being run in the name of cow welfare which was allegedly not functional ever. Samajwadi Party leader Jagdev Singh joined the discussion at this point.

Jagdev deflected all questions relating to the accusations and instead asked for a probe into those cow sheds that draw money from the government but do not exist in reality.

After this a heated debate started between the three party leaders with them blaming one another’s outfits for funding projects that do not exist. The anchor took a while to calm them down and bring them back to the discussion.

Raju said Aparna has been given undue favours since the time she became a part of the Yadav family. He added: “This is a matter that should be investigated. Questions are arising especially because no funds have been allocated to the NGO in this budget while an amount of Rs 2.5 crore was allocated last time. One should also investigate if the NGO receives funds from any other source or not. Aparna Yadav should give a public comment.”