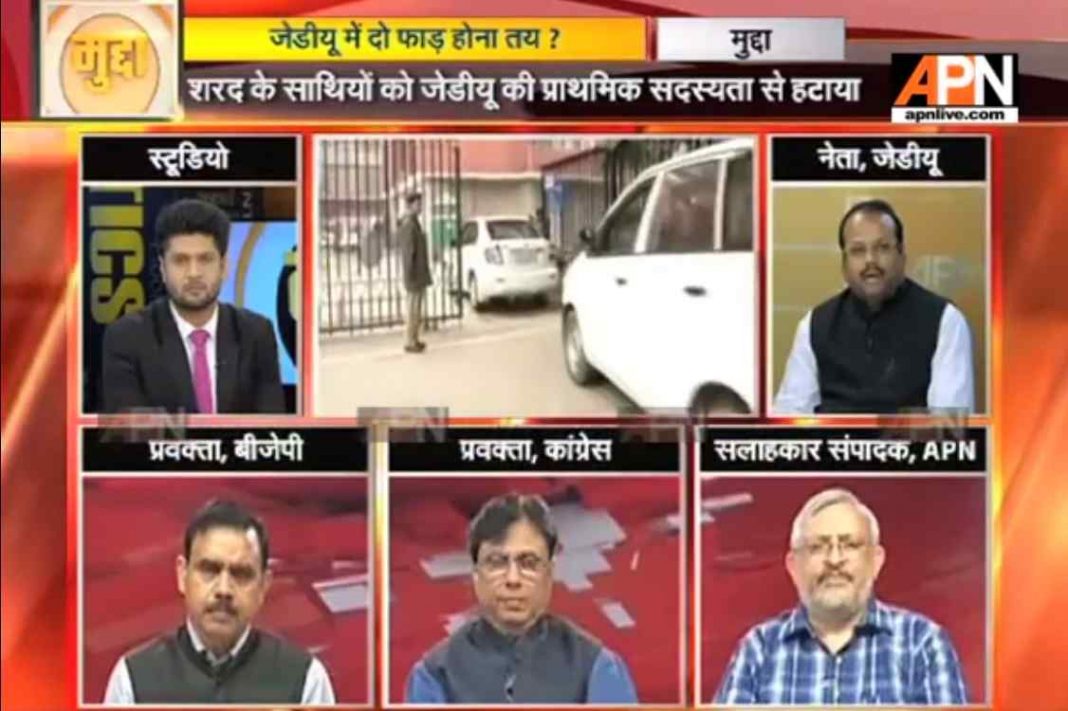 The JD(U) has officially joined the NDA with a resolution passed in the party’s national executive meeting. With this merger, the rift between the Nitish Kumar-led JD (U) and rebel leader Sharad Yadav’s camp has widened. The question that is being asked is this, who does the JD(U) belong to? In fact, Yadav claims it to be his party which had gone on to merge with Kumar’s Samata Party. It is said that Yadav is waiting for a formal action from the party’s side so that he can move the Election Commission.

At the outset, Prabhat Ranjan put forward the claim that Yadav is the one who had let Kumar take over the reins of his party. Yadav has been asked by the people to continue with the grand alliance in his janpanchayat—which he is willing to, Ranjan informed the audience. Asked if his party would accept support from Lalu Prasad and the RJD, Ranjan responded in the affirmative. “Not just Lalu Prasad Yadav, we will take support from the entire Opposition. The dream of an opposition-free India dreamt by the BJP can never come about in reality. And there can be no development of the country by leaving any community behind,” he said.

However, an argument later broke out between Ranjan and his own party colleague, Alok, who had joined the show over the telephone. Alok had accused Yadav of (euphemistically) sitting in Lalu Yadav’s lap, but Ranjan did not like his choice of metaphor.

BJP’s Pandey defended the new alliance, saying that Nitish always had a clean image and the previous alliance was clearly destined to have a short life as, according to him, JD(U) and RJD are ideological as well as practical opposites. The BJP had not rejected anyone—neither Nitish nor Sharad—as both left by choice. “We have had a good past. There was no problem in our alliance with JD(U). Nitish has always enjoyed an image of a dispenser of good governance. He rightly thought that staying with RJD might destroy that image. We, on the other hand, gave him our support because of his image,” Pandey said.

“What does the CM mean by saying that he won’t let the opposition make Gorakhpur a picnic spot? Such a tragic incident happened in his state and the CM could not even meet the parents of the victims. He refers to Akhilesh Yadav and Rahul Gandhi as Nawab and Prince but he is the princess (!) himself. He was born a mahant’s son and never knew what poverty is,” said Bhadauria of SP.

Govind Pant Raju explained the matter for the audience’s benefit, calling out the CM for his insensitivity. “We are never sensitive enough. Neither Akhilesh nor Mayawati did their part in the Opposition vis-à-vis this tragedy. The CM, too, now goes and makes such an insensitive comment. The people investigating the matter are the ones who should come under scrutiny. Even the Jhansi Medical College principal has said he will resign because payments there are also pending. The government cannot escape its responsibilities by blaming previous governments, especially where people’s lives are involved,” he said.