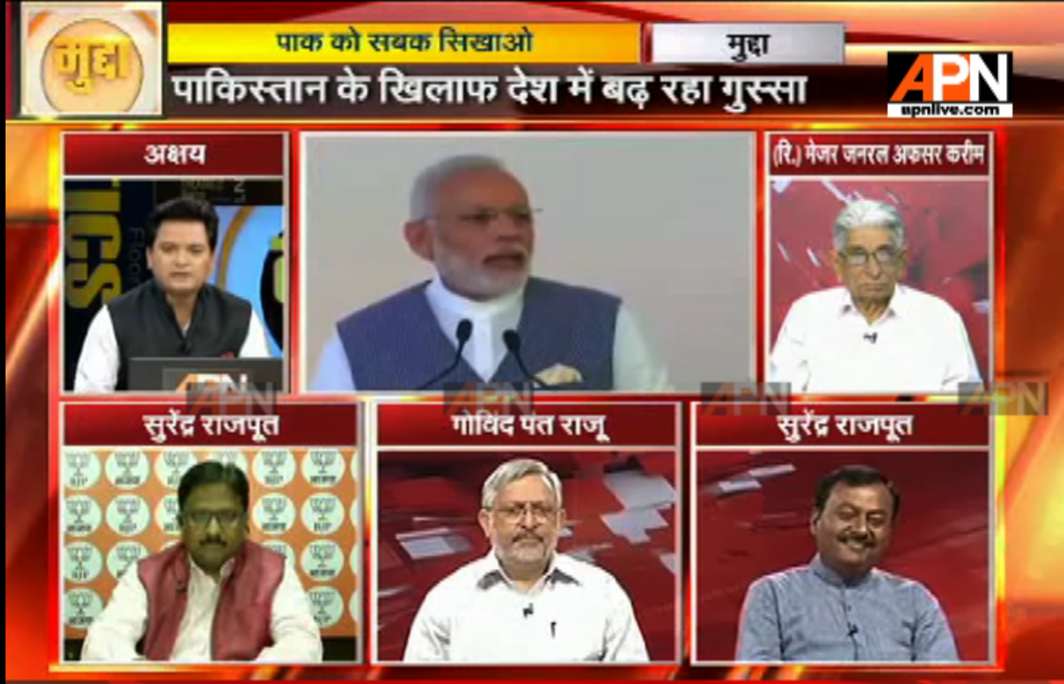 In the first-half of the Mudda, the actions that need to be taken following the ambush and beheading of two Indian soldiers by Pakistan Army on May 1 on the Line of Control were hotly debated. Referring to the PM’s radio programme by the same name, the opposition is calling for stopping Mann ki Baat and starting ‘Gun ki Baat’. The second part of the debate show saw a discussion on Uttar Pradesh’s CM Yogi Adityanath’s latest decision on training first-time legislators joining the Vidhan Sabha.

“We are bound by codes of good behaviour”

Maj-Gen Karim opened the session with the statement: “it’s not for the opposition to decide what needs to be done but for the government to now take responsible action”. He said the time has come to take offensive action. “I trust our army to know how to do that best,” he said. He said it’s the government’s responsibility to decide what to do and for the army to implement it. He also mentioned that there is a general directive that allows for taking stern action if needed and that it is for the army to gauge that.

Varma began the discussion with restraint but soon lost his cool when questioned repeatedly by the opposition. He said: “Our army is free and capable of taking an appropriate action. They don’t need to look towards the political class to know what to do next. They have already brought down two Pakistan bunkers.” He said Indian soldiers are not barbaric and are bound by codes of good behaviour which is “our strength and not our weakness”. He also mentioned the surgical strikes which took place end of last year and were the topic of many a heated argument.

Rajput said: “Terrorism is part of Pakistan’s foreign policy. The Indian government now needs to do their job and stop them.” He said there was no need to go on blowing one’s own trumpet over the surgical strikes. He reminded everyone of the fiery statement made by Sushma Swaraj in 2013 when Congress was in power and Pakistan had conducted a similar cowardly act. He mentioned the bangles that Smriti Irani wanted to send to then PM Manmohan Singh and then demanded what stringent measures BJP envisaged taking now that it was at the centre. He said: “I am categorically asking BJP to end pseudo-nationalism in the name of our army. I am against the hysteria created on social media by BJP using the army for vote gain.” He also promised to support BJP’s actions in giving a fitting reply to Pakistan.

Raju condemned the use of the word “pseudo-nationalism”. He said: “We need to reply in a manner which will make Pakistan fear to cross the LoC in future.” He said it was pointless to discuss “who said what in the past. The need of the hour now is to decide what steps we are taking next to stop Pakistan and how to keep our borders safe”.

“What was murder accused MLA Amanmani Tripathi doing sitting next to the CM?”

Varma praised the decision of Yogi Adityanath to organise training for first-time legislators. He said: “The popularity of a party depends upon how its members conduct themselves in the public sphere.”

Rajput chided the former’s statement saying: “None of this is new; this and other such statements are something that every party leader has said since time immemorial. These are a basis of a healthy democracy.” And then he pointed out how BJP does not walk the talk, saying: “What was murder accused MLA Amanmani Tripathi doing sitting next to the CM in Lucknow when BJP has won the elections on the promise of improving law and order in Uttar Pradesh?”

Raju dismissed the issue: “Call it a workshop or a classroom, the fact of the matter is that this training is needed for the new legislators.” He added: “The party should be aware of who the top leaders are seen in public with but you cannot just take one incident and question the morality of the entire party.”

Pandey contradicted Varma’s statement. “When someone joins the Vidhan Sabha for the first time, this so-called training is imparted to them. It is not something new that the BJP has started,” he said. He also said that in BJP it was not the top leaders who were committing big blunders in the public eye but only the first-timers who were doing so. And “that’s why such training becomes important”, he said.