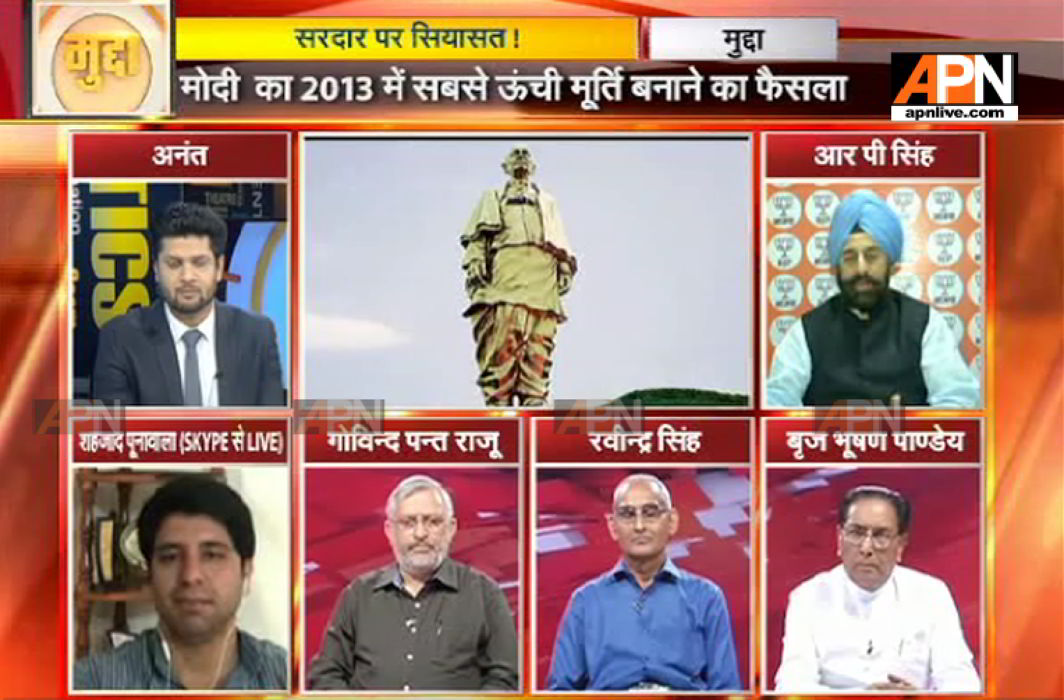 Flagging off the “Run For Unity” on the occasion of Sardar Vallabhbhai Patel’s anniversary, Prime Minister Narendra Modi took a swipe at the Congress, without naming the party, by saying that previous governments had ignored Patel’s legacy of nation-building. “Some people tried to ensure the contribution of Sardar Patel is forgotten,” Modi said. Known as the Iron Man of India, Sardar Vallabhbhai Patel was a senior leader of the Indian National Congress, who fought alongside Mahatma Gandhi and Jawaharlal Nehru for India’s Independence. After the country attained freedom in 1947, he was appointed as India’s first Home Minister and Deputy Prime Minister, and played a vital role in the integration of numerous princely states into the Dominion of India.

RP Singh said that the Congress has been overly worried about the Nehru-Gandhi legacy, at the expense of ignoring other leaders. “When has a road been named after Patel, or some other leader by the Congress?” he asked.

To this, Shazad Poonawala pointed out that being in Delhi, Singh should be aware of the Sardar Patel Marg where there is a statue of Gandhi. He said that the BJP is spreading falsities. He pointed out that in the Constituent Assembly, Patel had clearly stated that he is with Nehru on everything. He said that the BJP is exploiting the issue in view of the Gujarat polls.

Brij Bhushan Pandey said that no one can take away Patel’s legacy as he is as tall a leader as Nehru or Mahatma Gandhi. He said that he does not see any attempt being made to wipe out the legacy of Patel.

RP Singh mentioned that Parliament is full of pictures of Nehru, Indira Gandhi or Rajiv Gandhi, and the Congress has not even bothered about leaders like Narasimha Rao, the architect of the economic reforms.

Raju said that Patel is a national leader, and much bigger than just being associated with the Congress or Gujarat. He said that the PM is not right by claiming that Patel’s legacy has been wiped out, and neither is it right on the part of the Congress to claim that Patel belongs to them alone.

Ravindra Singh maintained that no party has belittled Patel’s contribution and pointed out that it is unfortunate that mudslinging is going on and such a tall leader has been dragged into controversy, simply because Gujarat is going to polls in a month.

RP Singh said that ever since the BJP has come to power at the Centre, it has done a lot to keep alive Patel’s legacy, and the “Run For Unity” is one such example.

Poonawala stated that being the youngest among the panellists, he can quote from school textbooks that have lauded the leader’s contribution. “There’s a Patel Academy for Police, Patel University, hydroelectric power plant in Patel’s name, a Patel memorial in Ahmedabad, and so on, which proves that there has never been an attempt to belittle the leader.

Pandey said that if one associates caste or a particular state with Patel, only then it can be said that an attempt in being made to belittle the leader. Patel belongs to the entire country. Parties should rise above electoral politics and not try to associate such an important leader with any state or caste, he pointed out.

Raju said that it is an open secret that Nehru and Patel differed on many aspects, just as other leaders too had their own opinions on various matters. “We should not see history with the mirror of today,” he said. The leaders, at that time, took action, or made statements which at that time were felt to be in the best interest of the country.

When RP Singh repeatedly told Anant that his point of view is not being heard, Raju intervened to say that APN is an open platform and all can voice their opinions, provided these are corroborated with facts.